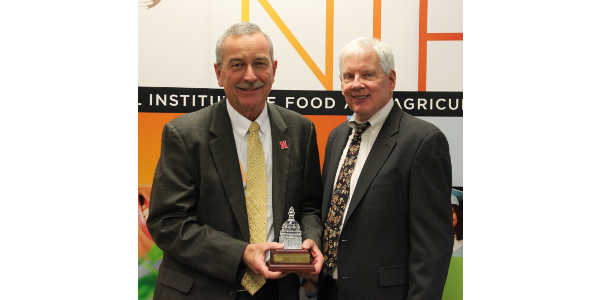 Chuck Hibberd (left), dean and director of Nebraska Extension, poses with J. Scott Angle, director of the National Institute of Food and Agriculture, during the NIFA Hall of Fame ceremony April 25 in Washington, D.C. (USDA-NIFA)

LINCOLN — Chuck Hibberd, dean and director of Nebraska Extension, was inducted into the U.S. Department of Agriculture’s National Institute of Food and Agriculture Hall of Fame on April 25 at a ceremony in Washington, D.C.

The hall of fame was established in 2011 to recognize individuals whose exceptional contributions to the institute’s mission at the local, regional, national or international level have made a positive impact on the lives of citizens.

“I am truly humbled to be inducted into the NIFA Hall of Fame,” Hibberd said. “This honor speaks to the strength of the partnership between NIFA and our land-grant universities and our mutual commitment to bring science to action in ways that transform practice and improve the lives and livelihood of Americans.”

Before assuming his current role in 2012, Hibberd was director of extension and associate dean of agriculture at Purdue University. He was also director of the Panhandle Research and Extension Center in Scottsbluff. Most recently, Hibberd was tapped to coordinate the University of Nebraska’s systemwide effort to help Nebraskans recover and rebuild following widespread flooding.

The National Institute of Food and Agriculture’s mission is to invest in and advance agricultural research, education and extension to solve societal challenges. To learn more, visit https://nifa.usda.gov/impacts.