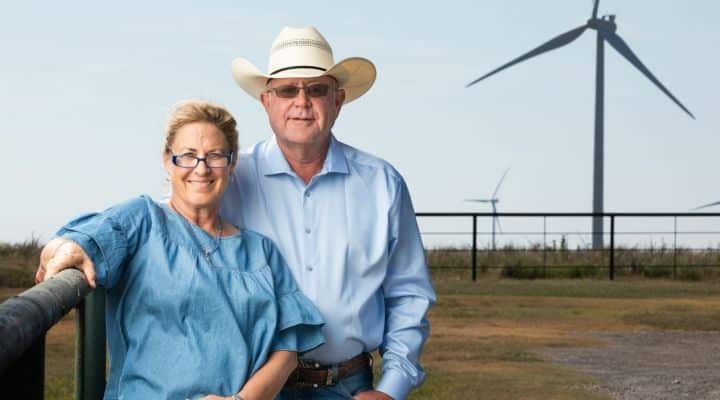 This photo of Chuck and Ruth Coffey on their ranch was supplied by the Leopold Foundation. Due to current conditions, the Coffeys were not able to attend the OCA Annual Awards Banquet where Chuck was recognized by his peers as the 2020 Cattleman of the Year.

OKLAHOMA CITY — Last Saturday evening, Chuck Coffey, Springer, Okla. was named Oklahoma Cattlemen’s Association’s (OCA) Cattleman of the Year. The award is the highest honor that the OCA bestows upon a member and was designed to recognize OCA members who have made significant contributions to the OCA and to the Oklahoma beef industry.

Their family cattle operation, the Double C Cattle Company, includes a commercial cow/calf herd along with grazing stocker cattle. Chuck is a fifth-generation cattle rancher and is proud that his children are the sixth and raising the seventh generation. Chuck received both his Bachelor and master’s degree in Rangeland Science from Texas A&M University.

Chuck is well known for being a teacher and mentor. He was an instructor at Murray State College and a consultant at the Noble Foundation before retiring to full-time ranching.

Chuck and Ruth were recognized earlier this year with the Leopold Conservation Award. This award recognizes individuals with a strong commitment to conservation.

“In fact, the Coffeys were under the impression that they were getting recognized once more for the Leopold Conservation Award when we asked them to join us virtually during the awards banquet,” said Weeks. “I admire Chuck and his commitment to serving as an industry leader in many capacities. Oklahoma is cattle country and folks like Chuck that make time to learn, lead and make a difference are vital to the longevity of the beef industry.”

Leadership involvement is also so important to Chuck and Ruth. Chuck has served many, many leadership positions in the cattle industry and in his community. Chuck has testified before Congressional Committee on behalf of the cattle industry. He has traveled to foreign countries sharing the great story of the US cattle producer. Most recently, Chuck completed his service to the Cattlemen’s Beef Board highlighted by his term as Chairman.

Chuck’s daughter, Sarah Armitage, accepted the award on his behalf.