Home » Chrysler Herbarium: a treasure trove of plants from past 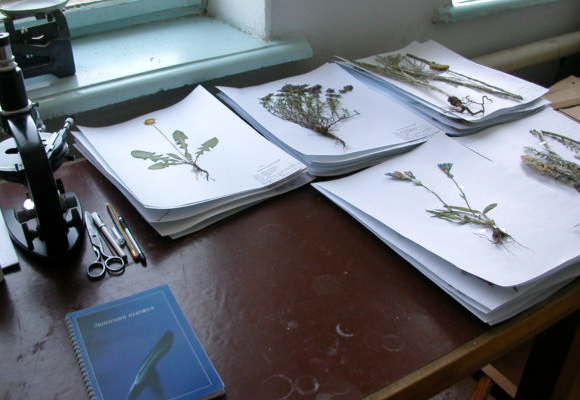 Centuries ago naturalists and scientists were busy cataloguing and collecting specimens of the natural world. Driving this may have been a desire to tame the wildness of nature, or perhaps the comfort of categorizing and defining the world. For generations these collections have been preserved and added to by individuals and institutions often operating with shoestring budgets. (photo provided by Rutgers University)

NEW BRUNSWICK, N.J. — Centuries ago naturalists and scientists were busy cataloguing and collecting specimens of the natural world. Driving this may have been a desire to tame the wildness of nature, or perhaps the comfort of categorizing and defining the world. For generations these collections have been preserved and added to by individuals and institutions often operating with shoestring budgets. One such collection that survives today, tucked into the basement of the Biological Sciences Building on Douglass campus in New Brunswick, is the Rutgers Chrysler Herbarium. An herbarium (plural: herbaria) is a collection of preserved plant specimens and associated data used for scientific study–like a plant library or museum. While still important for cataloging species taxonomically, herbaria have increasingly been used creatively to answer questions about our past, test hypotheses about our present, and make predictions for our future.

Herbaria can be lenses into our past. The collections can shed light on invasion ecology by determining when and where invasions began. For example, by paging through multiflora rose specimens, you can track when and where it was first recorded in New Jersey. Jay Kelly from the Center for Environmental Studies at Raritan Valley Community College used the herbarium to find the locations of historical test plots that had since been lost. He was then able to do a comprehensive study on how those plots had changed over the past century. Emily Meineke from Harvard University Herbaria has studied scale insects preserved on historical specimens collected in urban and rural areas to make predictions of how plants may react to the changing climate. Herbarium specimens are still used to answer questions of taxonomy, although not in the way those collecting specimens centuries ago could have imagined. Herbaria specimens, while dried and old, still contain viable DNA that can be analyzed. Researchers used herbaria specimens of Black Cherry to determine patterns of historic gene flow.

Until recently, the only way to use the vast data stored in herbaria was to page through stacks of pressed plants in person. Now, thanks to the Mid Atlantic Herbaria Consortium (MAHC), a vast effort has begun to digitize herbaria collections. These digital collections are open to the public and anyone with a question and creative mind can use them.

Through a MAHC grant, the Chrysler Herbarium’s army of volunteers was able to digitize 60,000 plant specimens, however there are over 100,000 specimens yet to be digitized! They require funds for more server space to house the rest of the digital collection. The herbarium also needs help processing the 60,000 images uploaded so far. Data written on labels, often penned by the hand of collectors over 100 years prior, need to be entered into the database. MAHC relies on citizen scientists to do this. If you would like to contribute, find out more at the Mid-Atlantic Herbaria Consortium website. To donate funds or volunteer, please email herbarium@sebs.rutgers.edu.

Volunteering online or in the herbarium can be very rewarding. Since 2016, the Chrysler Herbarium has trained over 80 students in the imaging, barcoding, labeling, transcribing, mounting and repairing of specimens. This ‘herbarium army’ is responsible for the 60,000 images already uploaded to MAHC.

Through volunteering, the students appreciate being part of something larger than themselves, even giving them a reverence to history. One such volunteer, Eva Popp shared, “Through working in the herbarium I developed a connection to other botanists across history. At first the collectors seemed so distant, but after seeing specimens collected from places that I had been to, I realized that time is the only thing that separates us. Although we existed hundreds of years apart from each other, we still lived in the same area and shared the same ecological interests. The great number of specimens collected in the 1900s by Douglass College students also opened my eyes to the legacy of women in science at Rutgers behind me.”

One such historical link to another female adventurer is a story uncovered through investigating specimen labels at the herbarium. The oldest specimens in the Chrysler Herbarium are from 1836 when they were collected by Johann Wilhelm Helfer and his wife in India. Rutgers professor Lena Struwe, after reading his name on the plant specimen found a historical record of Helfer through the British Museum in London which describes his wife: “At that time it was considered impossible for a woman to travel safely, so his wife, cut her long hair short, wore a turban or fez and carried a dagger and two pistols in her broad girdle.” One can only imagine their adventures while exploring the world, leaving for posterity some of the dried and pressed plants. Plants that if continued to be preserved, future researchers may use to answer questions that we haven’t yet dreamt of.

8 steps to get your milking routine winter ready