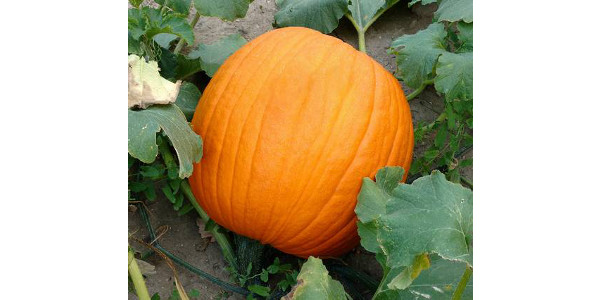 Pumpkins should be harvested when they have a deep, solid color and the rind is hard. The vines will usually be dying back at this time, said Rosie Lerner, Purdue consumer horticulture specialist. (Ben Phillips, MSU Extension)

COLUMBIA CITY, Ind. — I recall the Peanuts special I watched as a child where Linus and Sally waited in the pumpkin patch for the “Great Pumpkin” to arrive, only to be disappointed by a no-show in the end. Here in the real world, you may choose your own great pumpkin to carve jack-o’-lanterns or make pumpkin pies, and fresh market pumpkins are available for you.

Pumpkins are known as cucurbits (kyu-KER-bits), a class of vegetables including cucumbers, muskmelons, watermelons, pumpkins, summer squash, winter squash, and gourds. They are some of the most popular vegetables grown and enjoyed by Indiana residents.

Our own Indiana State Fair has an annual giant pumpkin contest, featuring pumpkins in excess of 200 pounds, and some that have eclipsed 1000 pounds.

Lerner said pumpkins should be harvested when they have a deep, solid color and the rind is hard. The vines will usually be dying back at this time. Cover during a light frost and avoid leaving pumpkins out during a hard frost to prevent softening.

Many consumers look for pumpkins not to carve, but to eat.

“If the pumpkin will be used for eating, I would recommend selecting a pie pumpkin and, ideally, talking with the producer to find out whether or not it is a variety known to be good for eating,” Maynard said.

Local residents have several options for buying pumpkins. Some local producers and roadside stands have pumpkins available, along with many of your favorite garden centers and retail outlets.

Finally, Purdue Extension has pumpkin production information available for homeowners who wish to grow pumpkins next year. You may also access information on growing pumpkins and other cucurbits at www.edustore.purdue.edu.