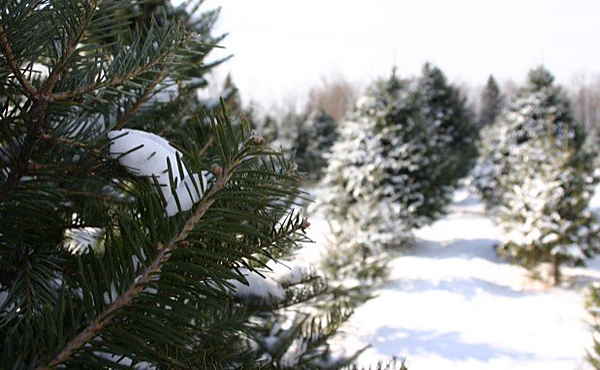 If you are in the market to purchase a real Christmas tree this year, Daniel Cassens, Professor Emeritus of forestry at Purdue University, said each variety of tree has advantages and disadvantages. (Wikimedia Commons)

COLUMBIA CITY, Ind. — If you are in the market to purchase a real Christmas tree this year, Daniel Cassens, Professor Emeritus of forestry at Purdue University, said each variety of tree has advantages and disadvantages.

“Scotch pine has become the traditional tree because it is easy to grow and maintain, and it is well accepted in the market place,” Cassens said. It has dark green needles and stiff branches that can hold heavy ornaments. It doesn’t drop needles easily.

Cassens said eastern white pine is a close second to Scotch pine in popularity. It has soft, long needles with a blue-green or silver-green color. “White pine probably doesn’t hold heavy ornaments very well — that’s the biggest drawback that it has,” Cassens said.

Douglas-fir trees have needles that are soft and dark green. Cassens said, “These trees seem to be more of a perfect cone shape and can be full, but not so full that the ornaments slide off. The moderately stiff branches are open enough that ornaments can be seen.”

Fraser firs are popular because of the Appalachian, down-home Christmas ambiance they bring into a home, and also because the widely-spaced branches display ornaments well. Needles are dark green with silvery undersides. The trees also are almost always a near-perfect pyramid shape, and have a great fragrance. Branches are stiff.

Both the Fraser fir and the Douglas-fir trees are usually considerably more expensive than pine trees, according to Cassens.

Canaan firs have a nice cone-shape and varieties can be very steep and narrow. Needles are dark green. This tree is being grown increasingly in Indiana as an alternative to Fraser and balsam fir. Branches are moderately stiff.

Concolor fir (white fir) is probably the best adapted fir species for Indiana growing conditions. It is somewhat more globose (fatter, more spherical) than Fraser and Canaan fir, and can be heavy. Needles on some varieties of concolor fir have a beautiful, silver, soft needle with and upright sweeping manor. Some varieties also have an outstanding silver-blue color. Branches are stiff.

Blue spruces have become a popular Christmas tree because of their color and their potential to be planted in the landscape after the holidays (see last week’s article). However, spruce trees tend to drop their needles. Trees should not be put it up early. Needles are sharp.

Norway spruces are pyramid-shaped, and older trees have pendulate foliage (meaning that secondary branches hang straight down from the horizontal main branch). Needles have a lighter green color, and branches are stiff.

Cassens said both blue and Norway spruces should be fresh-cut and placed in water as soon as possible to reduce the incidence of needle drop.

A local choose-and-cut operation will certainly furnish you with a fresh real tree, and the experience can become a family adventure or a tradition. Local retail outlets are also sources of cut real trees. According to the Indiana Christmas Tree Growers Association, Indiana ranks 11th in the nation with 200 tree farms producing almost 200,000 real Christmas trees per year.

Life of the Christmas tree after Christmas
January 2, 2020