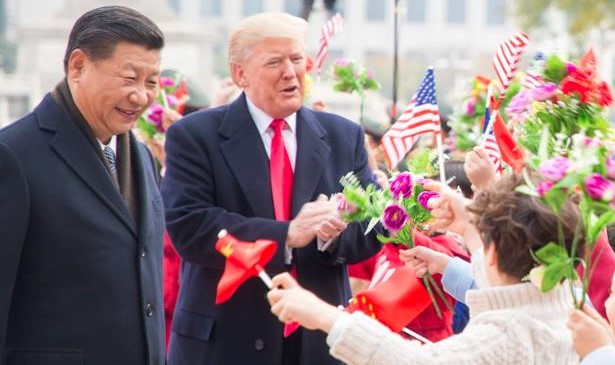 At their meeting on Dec. 1 in Buenos Aires, Xi and Trump agreed that the United States and China will hold off on imposing further tariffs on each other's imports and try to complete talks on technology and intellectual property rights issues within 90 days. (The White House, Public Domain)

BEIJING — China and the United States will continue their vice ministerial-level trade talks in Beijing for a third day on Wednesday, a U.S. official said, as financial market players closely watch the outlook for the trade dispute between the world’s two major powers.

The official was speaking to reporters late Tuesday following two days of talks in which Washington is believed to have called on Beijing to implement measures to protect intellectual property rights and increase imports of U.S. products.

Details of the talks were not immediately available, but U.S. President Donald said in a Twitter post, “Talks with China are going very well!”

The direct dialogue on trade between the world’s two largest economies came around one month after Chinese President Xi Jinping and Trump held a summit.

At their meeting on Dec. 1 in Buenos Aires, Xi and Trump agreed that the United States and China will hold off on imposing further tariffs on each other’s imports and try to complete talks on technology and intellectual property rights issues within 90 days.

The Trump administration warned at the time that “if at the end of this period of time, the parties are unable to reach an agreement, the 10 percent tariffs will be raised to 25 percent,” suggesting that a failure to finish negotiations will rekindle trade strains.

Amid escalating U.S.-China trade tensions, global stock markets have recently become shaky and concern has been mounting that the world economy would be weighed down by a slowdown of the Chinese and U.S. economies.

Beijing and Washington hope the latest talks will pave the way for a ministerial-level meeting that U.S. Trade Representative Robert Lighthizer and Chinese Vice Premier Liu He, Xi’s economic adviser, will attend, sources close to the matter said.

The United States has so far imposed tariffs of up to 25 percent on $250 billion of Chinese imports, with Trump urging Beijing to curb its huge trade surplus with the United States and improve the country’s alleged unfair business practices.

In retaliation, China has levied tariffs on more than 80 percent of all U.S. imports.

Chinese Foreign Ministry spokesman Lu Kang told reporters later in the day that the holding of the two diplomatic events on the same day was unintentional.

In another sign of progress, China’s farm ministry has newly approved the import of five genetically modified crops, local media said on Tuesday, with the United States putting pressure on the Asian nation to open up its agricultural market further.

The United States is known as the world’s biggest producer of genetically modified crops. China’s move is apparently aimed at boosting imports of U.S. farm goods.