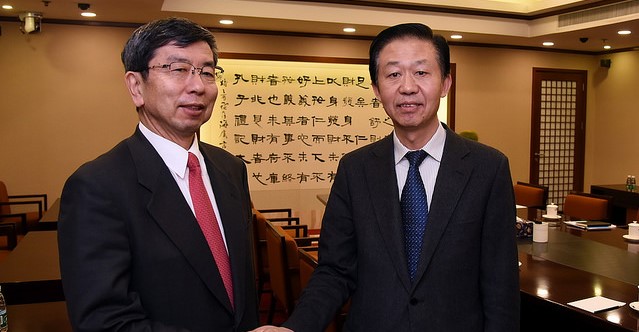 The White House says the planned tariffs are aimed at punishing Beijing for allegedly stealing American technology and pressuring U.S. companies to hand it over.

Xinhua cited Liu as saying that China is “ready and capable of defending its national interest and hopes both sides will remain rational.”

China said Friday that it planned to raise tariffs on a $3 billion list of U.S. goods, including pork, apples and steel pipes in response to the steel and aluminum duties earlier announced by Trump.

The Chinese move appeared to be a warning shot aimed at increasing domestic U.S. pressure on Trump by making clear which exporters, including farm areas that voted for the president in 2016, might be hurt.

On Friday, American farmers from hog producers in Iowa to apple growers in Washington state and winemakers in California expressed deep disappointment over being put in the middle of a potential trade war with China by the president many of them helped elect.

Overall, the nation’s farmers shipped nearly $20 billion of goods to China in 2017. The American pork industry sent $1.1 billion in products, making China the No. 3 market for U.S. pork.

“No one wins in these tit-for-tat trade disputes, least of all the farmers and the consumers,” said National Pork Producers Council President Jim Heimerl, a pig farmer from Johnstown, Ohio.

The U.S. has complained for years about China’s sharp-elbowed trading practices, accusing it of pirating trade secrets, manipulating its currency, forcing foreign companies to hand over technology, and flooding world markets with cheap steel and aluminum that drive down prices and put U.S. manufacturers out of business.

The spiraling trade dispute between the world’s two largest economies has spurred concerns among companies and investors that global commerce could be depressed.