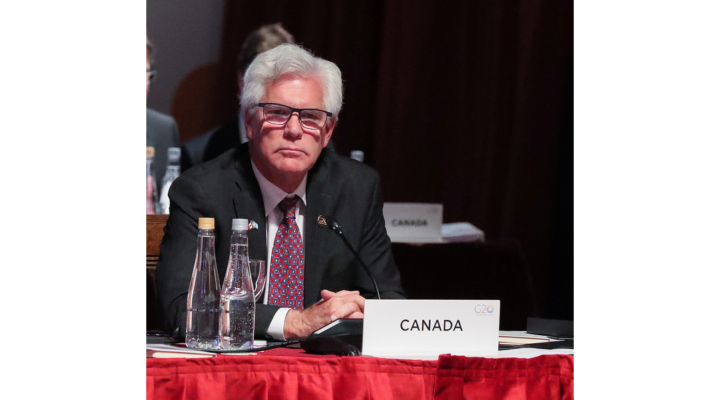 "We continue to ask Chinese officials for any evidence that this canola has any problems that can be proven with any scientific base or any scientific evidence — and so far we've heard nothing," International Trade Minister Jim Carr said in a phone interview from Saskatoon, where he was talking to business leaders about making the most of opportunities created by Canada's major trade deals. (G20 Argentina, Flickr/Creative Commons)

Carr said Canada is pushing to solve the economically important matter — but it needs China to provide proof to back up the claims.

“We continue to ask Chinese officials for any evidence that this canola has any problems that can be proven with any scientific base or any scientific evidence — and so far we’ve heard nothing,” he said in a phone interview from Saskatoon, where he was talking to business leaders about making the most of opportunities created by Canada’s major trade deals.

“We are calling on Ottawa to stop its navel-gazing about its internal controversies and fight back,” she said.

Notley added the issue could cost Alberta farmers hundreds of millions of dollars and lead to a loss of up to 3,000 jobs.

China’s decision to reject shipments of one of Canada’s key exports comes with the two countries in a diplomatic dispute that erupted after the December arrest of Huawei senior executive Meng Wanzhou in Vancouver at the behest of the United States.

On March 1, Canada’s Justice Department gave the go-ahead for the extradition case against Meng, which marked the formal start of the high-profile process that has thrust Canada into a highly uncomfortable position between the two superpowers.

In the days following Meng’s arrest, China arrested Canadian citizens Michael Kovrig, a Canadian diplomat on leave, and Michael Spavor, an entrepreneur, on allegations of engaging in activities that have endangered Chinese national security.

The men remain in Chinese custody and their arrests have been interpreted as attempts by Beijing to pressure Canada into releasing Meng.

China also sentenced another Canadian, Robert Lloyd Schellenberg, to death in a sudden retrial of his drug-smuggling case.

Asked whether there’s a link between the Meng case and the canola impasse, Carr said the government has no evidence of one.

“We’re treating it as a science issue, which is why we’re pressing Chinese officials to show us the science.”

Carr said the federal government has been contacting Chinese officials in Beijing and at the country’s embassy in Ottawa to find out why the blocked canola is considered to be “anything less than the very high (quality) canola that we know we are shipping abroad.”

On the status of formal Canada-China trade talks in general, Carr described it as a “difficult period” in a very long relationship that, for example, saw Richardson sign its first deal in China in 1910.

“It’s difficult because of the detention of Canadian citizens and we have been very clear about the importance of resolving that issue,” he said. “There are always conversations between officials, but I would say that it’s not an active period of those kinds of discussions.”

Carr said he looked forward to talking about Canada’s recently ratified trade agreements in Saskatchewan, which he noted is the province with the most diversified export markets.

He said 44 per cent of Saskatchewan’s exports last year were shipped to countries other than the United States — the most of any province.

Quieter week ahead after storms pass