Subscribe
Home / Missouri / Chestnuts can be grown in Missouri 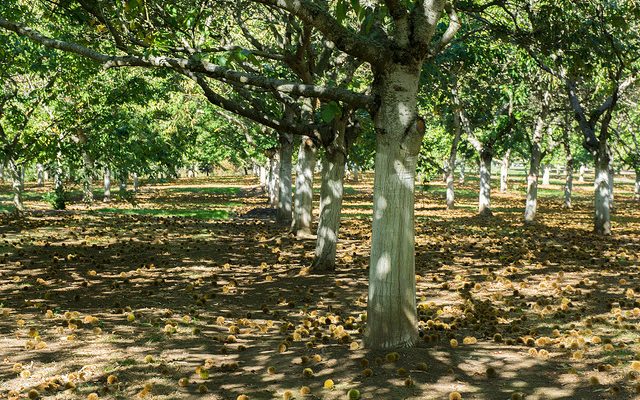 Chestnuts grow rapidly, and under the right conditions, may start bearing nuts after two or three years. (Ratha Grimes via Flickr)

COLUMBIA, Mo. — Nut crops are always popular in the fall, since they have been freshly harvested and are at their prime. One that is often found during holiday celebrations is the chestnut. This uniquely flavored nut can be grown in Missouri, so if you like them and have the space and appropriate site for at least two trees, you might consider planting some this coming year.

The American chestnut used to be a major species in eastern America. It provided lumber and food for humans, livestock and wildlife. Unfortunately, a fungal disease that affects chestnuts was introduced to this country in the early part of the twentieth century, and the American chestnut was virtually eliminated from our forests.

Since American chestnuts are out of the picture, there is one good option if you are interested in planting chestnuts. You can plant a species commonly called the Chinese chestnut. These trees are resistant to the disease that has eliminated our native chestnut.

Chestnuts grow rapidly, and under the right conditions, may start bearing nuts after two or three years. When planting, you will need to choose at least two different varieties to insure good cross-pollination. This is because chestnuts are self-sterile. A single chestnut tree is unlikely to bear nuts. The different varieties should be planted within 200 feet of each other for best results.

Chestnuts prefer a well-drained, sandy loam soil. They will adapt to other soil types, but do not do well in poorly drained soils. A moderately acid soil with a pH around 6.0 is best for them.

If you do decide to plant Chinese chestnuts, site selection will be critical. Plant on hilltops to avoid frost pockets. Although they flower relatively late, they are still subject to frost damage as soon as the buds begin to swell. Sloping ground, where cold air can drain downward, is the best site for them.

When harvesting chestnuts, you may need a good pair of leather gloves. Chestnuts grow inside burs that can be rough. The burs should open as they dry out, releasing the nut. It is best to collect them before freezing weather, since chestnuts that freeze may start to ferment.