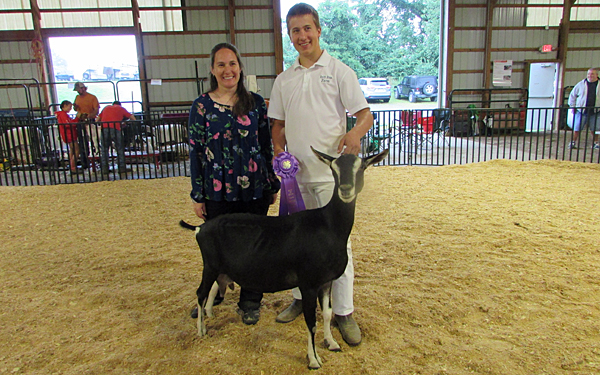 Rachel Teller of Hershey, Pa., did a great job not only in placing the animals, but also instructing the 4-Hers in how to improve their animals for show.

In the Alpine breed, Frank Reith of West Grove captured the Grand Champion award for his 4-year-old doe Reith Bros. Daisy and the Reserve Champion award with Dixie anther 4-year-old doe. Skylar Jackson of Landenberg was the Junior Champion with her kid Aristos’ Harvest Hennessy and Jubilee a 5-month-old kid belonging to Melissa Jackson of Glen Mills was the Reserve Junior Champion.

In the meat goat division, Lily Bramm of Pottstown won Champion for her heavy weight Boar goat. This was the first year that a market goat show was held with the animals being auctioned off as part of the 4-H livestock sale on Wednesday evening.

Another highlight of the day was watching our five Cloverbud goat participants — youth between the ages of 5 and 8, have the opportunity to enter the show ring with their animals. They all went home with Cloverbud Achievement Ribbons.

Apply for the Century Award