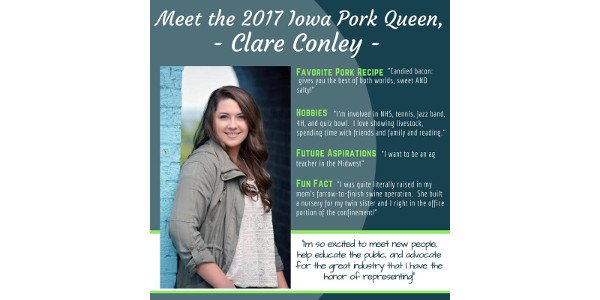 Clare Conley is a senior at Cherokee Washington High School and plans to attend Iowa State University in the fall to pursue a degree in agricultural studies. (Iowa Pork via Facebook)

CLIVE, Iowa — A high school senior from Cherokee has been named the 2017 Iowa Pork Queen by the Iowa Pork Producers Association.
Clare Conley won the crown tonight at the 45th annual Iowa Pork Congress banquet in Des Moines. She is a senior at Cherokee Washington High School and plans to attend Iowa State University in the fall to pursue a degree in agricultural studies. Clare is the daughter of Bonni Conley of Cherokee.

Joining Conley on the 2017 Iowa Pork Youth Leadership Team are Dylan Riedemann of O’Brien County and McKenna Brinning of Washington County. Riedemann and Brinning will serve as youth pork ambassadors this year.

Dylan is the son of Craig Riedemann of Calumet. He is a sophomore at Iowa State University where he is studying agricultural engineering. After graduation, Dylan would like to use his degree by working on hog building ventilation systems.

Brinning is the daughter of Shane and Kathleen Brinning of Keota. McKenna is a freshman at Iowa State University pursuing a degree in animal science. She hopes to one day own a veterinary clinic in a rural area and work with both large and small animals.

Nine young women and men entered this year’s competition. All of the contestants participated in interviewing and communications exercises at the Iowa Pork Congress and were judged on their skills, poise, presentation and overall knowledge of the pork industry and Iowa agriculture.

The top female contestant is crowned pork queen and the top remaining contestants, male or female, are named youth ambassadors. Each receives a $4,000 scholarship from IPPA.

The new youth leadership team members will represent IPPA at various pork promotional and educational events throughout the year.

The 2016 Iowa Pork Youth Leadership Team of Queen Holly Cook of Winthrop in Buchanan County and ambassadors Olivia Bisbee of Stacyville in Mitchell County and Ashley Smeby of Klemme in Hancock County concluded their terms with farewell speeches at tonight’s banquet.

A good time to consider joining a CSA