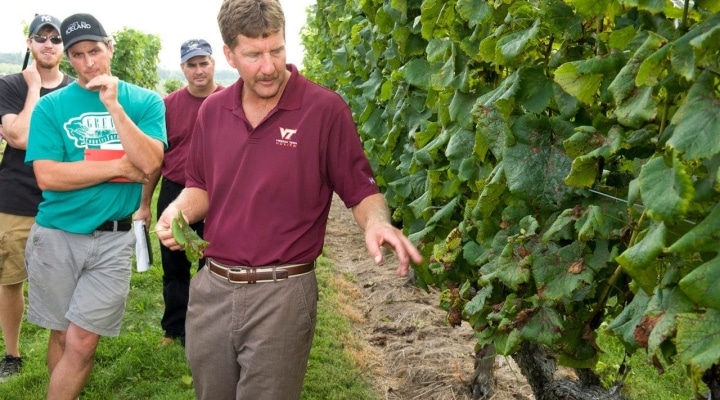 Like a fine Virginia wine, Tony Wolf’s career can be described as well-balanced, vibrant, and robust. Over the past three decades, the Virginia Tech professor has earned the respect of wine aficionados and researchers as well as the reputation as the “go-to grape guy.” Earlier this year, Wolf was named one of Wine Industry Advisor’s “most inspiring people” for his leadership, innovation, and inspiration in the industry (photo by Virginia Tech University)

BLACKSBURG, Va. — Like a fine Virginia wine, Tony Wolf’s career can be described as well-balanced, vibrant, and robust.

Over the past three decades, the Virginia Tech professor has earned the respect of wine aficionados and researchers as well as the reputation as the “go-to grape guy.” Earlier this year, Wolf was named one of Wine Industry Advisor’s “most inspiring people” for his leadership, innovation, and inspiration in the industry.

What was once a crawling industry of just six wineries in 1980, Virginia’s wine-growing industry is now estimated at $1.73 billion. More than 300 wineries exist throughout the state today, thanks in part to Wolf’s influence.

A dedicated educator and leader, Wolf has touched the lives  — and palates —  of wine lovers across the globe. Closer to home, he has made a lasting impression on his students and colleagues in the College of Agriculture and Life Sciences, Virginia Cooperative Extension, and the Alson H. Smith Jr. Agricultural Research and Extension Center.

Wolf retired from 36 years of full-time service to the university earlier this year. He has worked part-time for the Virginia Agricultural Experiment Station for the past five months, ending Aug. 24. Reflecting on his full-bodied career, he rarely references personal accomplishments. Instead, he focuses on those who have inspired him, those who have guided him, and those who have so often called upon him to guide Virginia’s wine-growing industry into the future.

“As I look back over my career, maybe some of the most gratifying aspects of my job have been the relationships I’ve established with stakeholders — with friends, I mean,” Wolf said.

The feeling is mutual, agree his friends, many of whom shared “Tony testimonials” in a wine publication when they learned of his retirement earlier this year.

“Undoubtedly, had Tony chosen another region, had the cards fallen some other way and Virginia was left without Tony Wolf, we would be 15 or 20 years behind where we are now, maybe more,” wrote Nate Walsh of Walsh Family Wine in Grape Press, the quarterly publication of the Virginia Vineyards Association.

“Thanks in good measure to Tony, we are now able to grow world-class grapes,” wrote Bill Tonkins of Veritas Vineyards and Winery.

“Tony taught us all to be better at what we do,” wrote Chris Hill, a vineyard consultant and longtime friend of Wolf’s. “He has been our fearless leader, and dang, we will miss him.”

Since joining the College of Agriculture and Life Sciences in 1986, Wolf has worked in a variety of different Extension, teaching, and administrative positions. He likes to break his career into layers, much like how a sommelier might describe different wines.

Dry? Wolf’s career is anything but.

Wolf received his undergraduate degree from West Virginia University, about a three-hour trip from his hometown in Jefferson County, West Virginia. A summer job at a research station introduced him to agricultural research. That experience, along with family friends who owned a fruit production business, influenced his decision to pursue and earn a master’s degree and a doctorate in viticulture from Penn State and Cornell universities, respectively.

A job with Virginia Cooperative Extension called him back to the mid-Atlantic. In his role with Extension at Virginia Tech, Wolf developed a geographical information system-based approach to vineyard site evaluation, a useful and frequently-used tool for vineyard owners and consultants. He authored a wine grape production guide and maintained a regular newsletter, publications that are still relevant today. He considers this work, along with the connections he made in the community and the knowledge he was able to share, a highlight of Extension.

“People would often ask during this period in my career, ‘What do you work with?’” Wolf said. “And my general response was, ‘I work with people. I try to teach people the current science of grape growing and how to overcome some of the challenges that we have.’”

Hill, a vineyard consultant to a wide range of clients since 1993, met Wolf early on in his career. Since then, they’ve developed a friendship and deep respect for one another, especially their passion for viticulture. Hill recalled when Wolf first appeared on his radar, “in 1986, fresh out of Cornell with a Ph.D. and an eagerness to help.

“From that time onward, our industry began to move from crawling to stumbling – almost upright – and within a couple of years, to walking fully upright,” Hill said. “Every aspect of the viticulture Tony taught us was geared toward improving grape quality at harvest so that we could make better wine. As grape quality improved, so did wine quality. More wine began to be sold at a higher price. As wine quality improved, demand for wine grapes increased. As demand for our wine grapes increased, the value of our crop increased, and grape income increased. As wine and grape income increased, there was more money for viticultural and enological research, which improved grape and wine quality further. And it goes on and on.”

The pairing of research and Extension

Extension and research go hand-in-hand, Wolf said, and he became more immersed in the latter a few years into his tenure.

In the late ’80s, he became interested in researching grape varieties that were doing well in other areas of the world with similar climates to Virginia – warm growing seasons and cold winters. Wolf looked to locations such as the south of France and eastern Europe for varieties that might prosper in Virginia. Over the years, many of these were imported, evaluated, and successfully grown in the commonwealth.

Petit manseng. Petite verdot. Viognier. Chardonel. Although you may not see his name on the labels of the local wines setting in the rack, chances are high that Wolf had some impact on these grape varieties used to produce the fragrant beverages.

Not as visible but just as viable to Virginia’s viticulture, Wolf considers work with grape pests and diseases, like the lethal Grapevine Yellows, and canopy and floor management among the most important areas of his research.

“Research is all about tangible outputs,” Wolf said. “Seeing these methods applied in the field and people benefitting from the outcomes. … That has been rewarding to watch.”

‘The help of others’

With a solid footing in Extension and research, Wolf slid into his first administrative role in 2004 as the director of the Alson H. Smith Jr. Agricultural Research and Extension Center.

He said the position, one in which he served up until his retirement, was both rewarding and taxing. With little leadership experience, he admitted, “it required a lot of learning and support along the way.”

Much of that support came in human form.

Chris Bergh has been the entomologist at the Alson H. Smith Jr. center since 2000. He recalled Wolf’s immediate influence on the center, specifically his morale.

“Tony’s leadership modernized things in some important ways, including more regular staff and faculty meetings at which he provided updates from campus administration and enabled feedback and updates from the group,” Bergh said. “He has been excellent at listening to the faculty and staff, soliciting their input, and promoting a team approach to problem-solving and identifying the way forward for our strategic planning. This has promoted a very collegial and inclusive work environment.”

Wolf, who has taken numerous sabbaticals across the world to advance the wine industry at home, encouraged his colleagues to explore the same opportunities. Bergh, himself, benefited from a trip to New Zealand. Wolf has also had a major impact on the center’s graduate students, many of whom have secured successful careers thanks to his influence.

Highly regarded by his peers, Wolf is just as grateful for them. In-person, from afar, or in spirit, he said he constantly turned to others throughout his career for inspiration.

His father’s limitless curiosity. His Ph.D. advisor’s guidance. The department head who hired him and advocated for him. The researcher who collaborated with him on Grapevine Yellows.

“I’ve had some tremendous role models in my life,” Wolf said. “I wouldn’t have gotten this far in my career without the help of others.”

In retirement, Wolf said he looks forward to spending time with another of his many “inspirations,” his wife of 42 years, Sue, a scientist in her own right.

“She’s seen me through my entire academic career and has certainly inspired me to try to be a more balanced, patient, and compassionate person, with work, family, and play,” Wolf said.

Speaking of play, the Wolfs look forward to a lot more of that in the coming years. They plan to hike, bike, kayak, hunt, fish, garden — and, perhaps, enjoy a glass of wine or two.