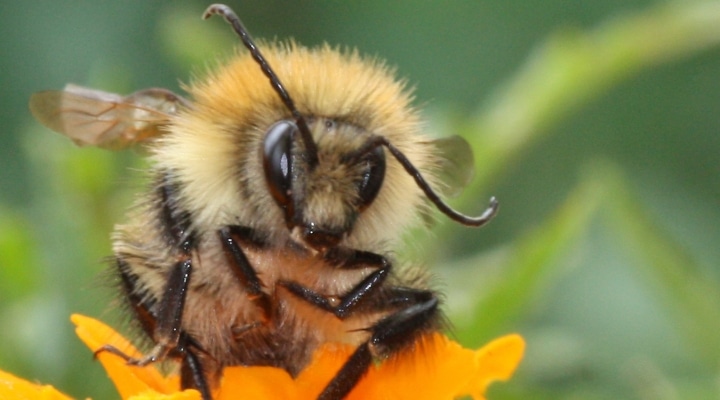 A study documenting bees that are reported to occur in Pennsylvania has found the presence of 437 species, including 49 never before recorded in the state. Researchers said the resulting checklist of bees in the commonwealth also identifies species not native to North America and several native species that may be of conservation concern. (photo by martinbuck119, Creative Commons/flickr.com)

UNIVERSITY PARK, Pa. — A study documenting bees that are reported to occur in Pennsylvania has found the presence of 437 species, including 49 never before recorded in the state. Researchers said the resulting checklist of bees in the commonwealth also identifies species not native to North America and several native species that may be of conservation concern.

“Bees are a diverse and important group of insect pollinators,” said lead researcher Shelby Kilpatrick, doctoral candidate in entomology in Penn State’s College of Agricultural Sciences. “Overwhelming evidence of declines in managed and wild bee populations points to the need for a better understanding of bee diversity across different geographic areas. But despite extensive research, we still don’t know enough about the diversity and distribution of native bee species.”

Kilpatrick explained that this study builds on the first checklist of bees in Pennsylvania — published by other researchers in 2010 — which reported 372 species from more than 13,000 specimens located in 20 collections. Since the first checklist was published, thousands of additional specimens from the state have been collected and databased, new species have been described, and the taxonomic status, or scientific classification, of some species has changed.

The data then were compared to the original checklist, resulting in a new total of 437 species, including 79 new state species records representing five of the six bee families in North America. Among these 79 were 49 species reported for the first time in Pennsylvania and another 30 that did not appear on the 2010 checklist. The researchers documented new species records for all but two of the state’s 67 counties.

Of the six bee families in the state, the one with the highest number of reported species, 118, was Apidae, which includes honey bees, bumble bees and carpenter bees, followed by Halictidae, commonly called sweat bees, with 110, and Andrenidae, known as mining bees, with 100. Megachilidae, comprised mostly of mason bees and leafcutter bees, accounted for 81 species; Colletidae, often referred to as cellophane bees and masked bees, had 24; and Melittidae, a family of rare, small bees that typically do not have common names, was represented by four species.

The researchers, who published their results in the Journal of Hymenoptera Research, also list at least five species of conservation concern that may be in decline or threatened, Kilpatrick noted.

“We don’t know the population status for most bee species, and some may be experiencing declines or other changes,” she said. “To assess that, further research is required, but in the absence of these data, we provide a breakdown of the number of years since each species last was collected in Pennsylvania.”

Most bee species in the state have been collected between 2000 and 2018, but at least 56 species — or nearly 13% of all species in the state — have not been detected within that time frame, according to Margarita López-Uribe, Lorenzo L. Langstroth Early Career Professor and assistant professor of entomology, in whose laboratory Kilpatrick conducts her doctoral research.

For example, Epeoloides pilosulus (Cresson, 1878), part of a genus of cleptoparasitic bees that lay their eggs in the nests of other bee species, is considered a species of conservation concern due to extreme rarity within its range since the 1960s. “This species has not been reported in Pennsylvania since 1911, according to our data,” López-Uribe said.

Checklists such as this also are important for documenting the status of exotic species in the state, the researchers contend.

“Non-native species potentially can out-compete native bees for resources, transmit diseases and parasites, change pollination effectiveness, and hybridize with local species,” López-Uribe said. “On the other hand, exotic species also may have positive effects, such as serving as pollinators of native and agricultural plants or as bioindicators and biological control agents.”

Overall, the updated checklist provides a new baseline for research on bee species, ecology and conservation in Pennsylvania, said Kilpatrick, who added that this study also will contribute to future updates of the Pennsylvania Pollinator Protection Plan, which was developed by the state Department of Agriculture and entomologists in Penn State’s Center for Pollinator Research.

“We emphasize that checklists are not static,” Kilpatrick said. “This dataset, including the information about when each species last was recorded in the state, shows that there is a need for regular monitoring, both targeted and widespread, to document changes in species’ abundance, population status and distribution over time. Future surveys and specimen records inevitably will provide new information. We hope that the updated checklist encourages interest in bees across the state.”

This work was supported by the U.S. Department of Agriculture’s National Institute of Food and Agriculture and the Graduate Training Program in Integrative Pollinator Ecology funded by the Penn State College of Agricultural Sciences’ Strategic Networks and Initiatives Program.

Holsteins: the Big “H” in dairy