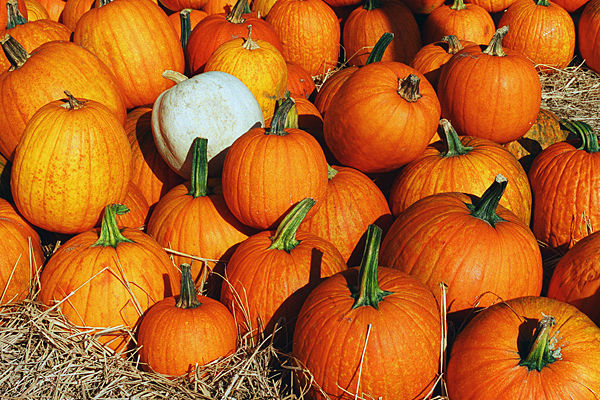 Pumpkins are part of the curcurbita family, which includes squash, cucumbers, watermelons and others. (University of Florida)

GAINESVILLE, Fla. — If, like Charlie Brown, you seek “The Great Pumpkin” this Halloween, you might first want to paint it to keep it intact, said Gene McAvoy, an Extension agricultural agent with the University of Florida Institute of Food and Agricultural Sciences.

But many factors go into growing, buying and carving a pumpkin.

Timing is everything, said Ed Thralls, a horticultural agent with UF/IFAS Extension Orange County, who suggests purchasing the pumpkin about a week before Halloween.

“I want a firm pumpkin that will stand up for several days once I scoop out the insides and carve faces into the shell,” Thralls said.

While some want pumpkins to serve as jack-‘o-lanterns, others eat parts of them.

“Pumpkin seeds are a delicious and nutritious snack alternative any time of the year,” said Virgilia Zabala, a family and consumer sciences agent for UF/IFAS Extension Orange County.

Pumpkin seeds are high in oil, protein and total unsaturated fatty acids. One ounce of pumpkin seeds provides 6 grams of protein —the same amount found in an egg. Unsaturated fatty acids are the “good” kind of fat, the ones that benefit the heart. The antioxidants in pumpkin seeds have been associated with a reduction in the risk of certain cancers — gastric, breast, lung and colorectal cancer — and the phytosterols that pumpkin seeds contain can help lower cholesterol levels, Zabala said.

“In other words, pumpkin seeds may be small but they are powerful,” she said.

Not many pumpkins are grown in Florida. But that may change in a few years.

Geoffrey Meru, an assistant professor of horticultural sciences at the UF/IFAS Tropical Research and Education Center in Homestead, Florida, is working with farmers in South Florida to try to change that. Meru wants to help grow pumpkins that are more like winter squash — and he’s trying to develop a variety that has superior flesh quality and nutritious seeds.

“I would advise gardeners and potential growers that they should start small and make sure they have an aggressive pest and disease program,” McAvoy said. “For commercial growers and market gardeners, timing is everything. Pumpkins can fetch a nice price in the weeks leading up to Halloween.”

Once Halloween is over, UF/IFAS Extension agents recommend homeowners add the gourd’s organic materials to their compost pile.

“Make sure not to include the seeds unless you want pumpkins growing from your compost pile in the near future,” Thralls said. “If you do not have a compost pile, set the pumpkin leftovers out with the yard waste and not in the kitchen waste.”

Here’s a little history and some tidbits, courtesy of UF/IFAS Extension faculty:

“Pumpkins are special to Americans because they are a colorful and decorative symbol for the fall holiday season, including Halloween and Thanksgiving,” said Bob Hochmuth, director of the North Florida Research and Education Center-Suwannee Valley. “The pumpkin is an agricultural product that represents and celebrates the successful harvest of a farmer’s labor.”

— University of Florida Institute of Food and Agricultural Sciences

Raising pumpkins in hues from orange to blue
October 13, 2020