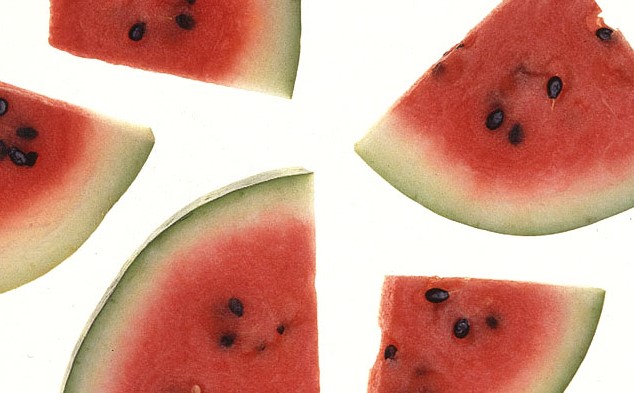 There was a time, a half century ago, when a good watermelon was rarely found in a grocery. Melon lovers had to grow their own, which, sadly, wouldn't keep for long. Then, in the 1940's, along came a USDA plant breeder who set out to bring us a better watermelon. The result was "that gray melon from Charleston," formally called the Charleston Gray. (Photo by Scott Bauer)

WASHINGTON — Summertime is quickly approaching, and Agricultural Research Service (ARS) scientists and their university colleagues are reporting on genomics research on a traditional summer treat, watermelon. In a long-term study, researchers explored the genetics of “Charleston Gray,” a watermelon variety that was introduced to the public in 1954 by ARS.

The research team, led by ARS geneticist Amnon Levi at the ARS U.S. Vegetable Laboratory, in Charleston, South Carolina, and Zhangjun Fei at the Boyce Thompson Institute in Ithaca, New York, collaborated with scientists at the Boyce Thompson Institute on the assembly of the principal American watermelon cultivar “Charleston Gray” genome. In addition, they collaborated with scientists in several other universities, including North Carolina State University, Michigan State University, and West Virginia State University on evaluating the genetic diversity of the U.S. Department of Agriculture (USDA) watermelon Plant Introduction (PI) collection.

According to Levi, the scientists employed the most advanced genomic technologies available during each phase of the study to sequence the “Charleston Gray” genome and genotyped an additional 1,365 watermelon lines from the USDA National Plant Germplasm System (NPGS). The research team identified regions in the watermelon genomes that confer disease resistance or control several important fruit quality traits. Unlocking the “Charleston Gray” genome will facilitate the identification of valuable new genes for utilization in breeding programs for the improvement of watermelon cultivars.

Watermelon is an important fruit crop throughout the world and provides a rich source of health-promoting compounds. Nearly six percent of all land used for growing produce is planted with watermelon with an annual global production of 117 million tons in 2016. Watermelon is commercially grown in 44 states in the U.S. with the highest production in Georgia, Florida, Texas, California and Arizona.