Home / National / Changing temperatures helping corn — for now
A new user experience is coming! We'll be asking you to login to your Morning Ag Clips account March 1st to access these new features.
We can't wait to share them with you! Read more here. 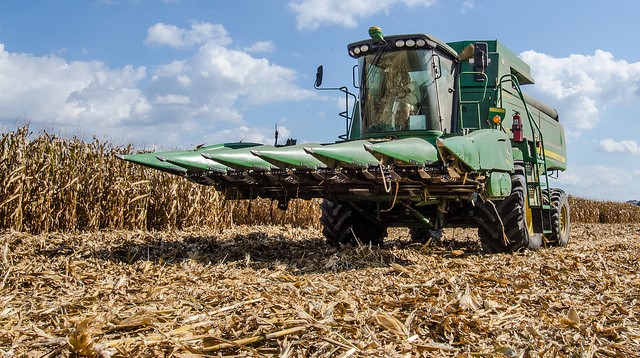 In a new paper, researchers found that a prolonged growing season due to increased temperatures, combined with the natural cooling effects of large fields of plants, have had a major contribution to improved corn production in the U.S. (U.S. Department of Agriculture, Public Domain)

CAMBRIDGE, Mass. — The past 70 years have been good for corn production in the midwestern United States, with yields increasing fivefold since the 1940s. Much of this improvement has been credited to advances in farming technology but researchers at Harvard University are asking if changes in climate and local temperature may be playing a bigger role than previously thought.

In a new paper, researchers found that a prolonged growing season due to increased temperatures, combined with the natural cooling effects of large fields of plants, have had a major contribution to improved corn production in the U.S.

“Our research shows that improvements in crop yield depend, in part, on improvements in climate,” said Peter Huybers, Professor of Earth and Planetary Sciences in the Department of Earth and Planetary Sciences (EPS) and of Environmental Science and Engineering at the Harvard John A. Paulson School of Engineering and Applied Sciences (SEAS). “In this case, changing temperatures have had a beneficial impact on agricultural production, but there is no guarantee that benefit will last as the climate continues to change. Understanding the detailed relationships between climate and crop yield is important as we move towards feeding a growing population on a changing planet.”

The research is published in the Proceedings of the National Academy of Sciences (PNAS).

The researchers modeled the relationship between temperature and crop yield from 1981 to 2017 across the so-called Corn Belt: Illinois, Indiana, Iowa, Kansas, Kentucky, Michigan, Minnesota, Missouri, Nebraska, Ohio, South Dakota, and Wisconsin. They found that as temperatures increased due to global climate change, planting days got earlier and earlier, shifting by about three days per decade.

“One of farmers’ biggest decisions is what they plant and when they plant it,” said Ethan Butler, first author of the paper and former graduate student in EPS. “We are seeing that farmers are planting earlier – not only because they have hardier seeds and better planting equipment — but also because it’s getting warmer sooner.”

Butler is currently a Postdoctoral Research Associate in the Department of Forest Resources at the University of Minnesota.

Early planting means the corn has more time mature before the end of the growing season.

There is also a second, more surprising trend that has benefited corn yields. Whereas the vast majority of temperatures have warmed over the last century, the hottest days during the Midwestern growing season have actually cooled.

“Increasingly productive and densely-planted crops can evaporate more water from leaves and soils during hot days,” said Nathaniel Mueller, former postdoctoral research fellow at the Harvard University Center for the Environment and co-author of the paper. “Widespread increases in rates of evaporation apparently helps shield maize from extreme heat, cooling the surrounding area and helping to boost yields.”

Mueller is currently an Assistant Professor of Earth System Science at the University of California, Irvine.

The researchers estimate that more than one quarter of the increase in crop yield since 1981 can be attributed to the twin effects of a longer growing season and less exposure to high temperatures, suggesting that crop yield is more vulnerable to climate change than previously thought.

The researchers also show that the planting and harvest dates farmers currently use is significantly better adapted to the present climate than it would be to climates in earlier decades.

“Farmers are incredibly proactive and we’re seeing them take advantage of changes in temperature to improve their yield. The question is, how well can they continue to adapt in response to future changes in climate,” said Huybers.

–Harvard John A. Paulson School of Engineering and Applied Sciences
via EurekAlert!

Putting marginal farmlands to good use