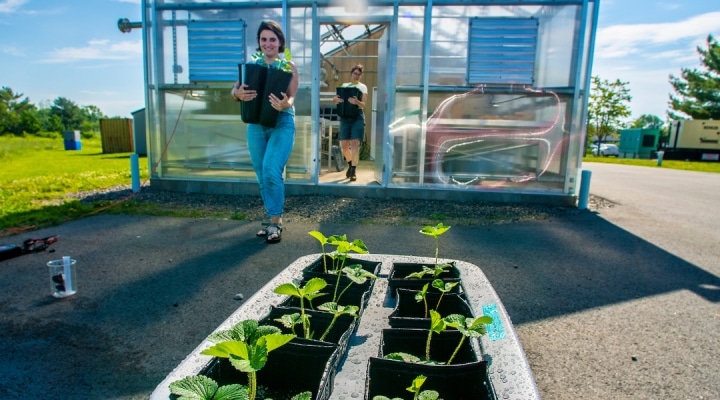 Plant, soil and environmental science graduate students Haley Jean (sunglasses) and Sara Kelemen (white shirt) conduct rainfall simulation experiments on strawberries out at the Extension Plant Pathology Greenhouse in an effort to find how climate change will affect the production of strawberries and other specialty crops in the Northeast. (Courtesy of the University of Maine)

ORONO, Maine — University of Maine researchers are studying how changes in rainfall patterns caused by climate change could affect strawberries in the Northeast.

Principal investigator Rachel Schattman, an assistant professor of sustainable agriculture, and her research team built a precipitation and cropping simulator to assess the effects of four possible rainfall scenarios on strawberries and other specialty crops in the region.

The first and second scenarios are based on recent years — 2001 and 2019 — with one year with fairly even precipitation across the growing season and the other characterized by a wet spring and some dry periods in the fall. The third scenario is a plausible mid-century (2050) future scenario in which rainfall is delivered in intense clusters separated by periods of dryness. The fourth scenario is a plausible end-of-century (2090) scenario that simulates conditions as they may occur in a future climate for a wet year with heavy rainfall events separated by longer and more intense dry periods.

The research team is measuring the loss of soil nitrate through leaching and runoff, incidents of disease and insect damage, and plant physiological performance resulting from each rainfall scenario in the UMaine Agroecology Lab and the UMaine Extension Plant Pathology greenhouse. Other researchers involved in the project include Haley Jean, a graduate student of plant, soil and environmental science; Yongjiang Zang, an assistant professor of applied plant physiology; Alicyn Smart, University of Maine Cooperative Extension plant pathologist and director of the Plant Disease Diagnostic Lab; and Sean Birkel, University of Maine research assistant professor and Maine’s state climatologist.