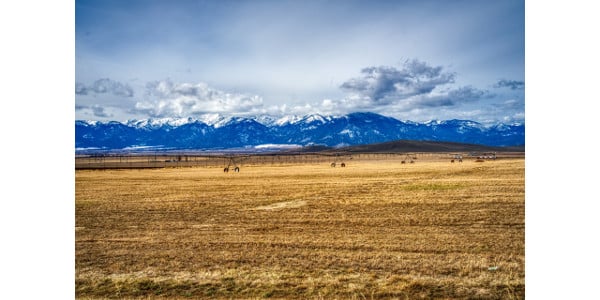 The findings pinpointed basins around the world most at risk of not having enough water available at the right times for irrigation because of changes in snowmelt patterns. Two of those high-risk areas are the San Joaquin and Colorado river basins in the western United States. (Photo: Kevin Bidwell/ Pexels)

FORT COLLINS, Colo. — This story was adapted from a news release developed by Jeff Grabmeier at The Ohio State University.

In a study published April 20 in Nature Climate Change, an interdisciplinary team of researchers analyzed monthly irrigation water demand with snowmelt runoff across global basins from 1985 to 2015. The goal was to determine where irrigated agriculture has depended on snowmelt runoff in the past and how that might change with a warming climate.

Researchers then projected changes in snowmelt and rainfall runoff if the Earth warms by 2 or 4 degrees Celsius – about 3 ½ or 7 degrees Fahrenheit – which will potentially put snow-dependent basins at risk.

The findings pinpointed basins around the world most at risk of not having enough water available at the right times for irrigation because of changes in snowmelt patterns.  Two of those high-risk areas are the San Joaquin and Colorado river basins in the western United States.

Nathan Mueller, senior author on the study and an assistant professor at Colorado State University, said that the study reveals how many of our important agricultural regions rely on snowmelt for irrigation. “Our research shows how efforts to halt climate change could benefit farmers and the food supply by preserving snowmelt as a vital water resource for agriculture,” he added.

Yue Qin, lead author and an assistant professor of geography at The Ohio State University, said that in many areas of the world, agriculture depends on snowmelt runoff happening at certain times and at certain magnitudes. “But climate change is going to cause less snow and early melting in some basins, which could have profound effects on food production,” she said.

Other basins in which agriculture is at particular risk because of changes in snowmelt are located in southern Europe, western China and Central Asia.

Depending on both the magnitude and the timing, rainfall runoff may be able to compensate for declines in snowmelt runoff in meeting irrigation water demand – but only for some basins, the researchers calculated.

“In many basins, future changes in rainfall do not compensate for the lost snowmelt during crop growing seasons,” Mueller said.

The San Joaquin, for example, is one basin where increases in rainfall runoff won’t be able to make up for snowmelt decline when irrigation is most needed.

The researchers evaluated the potential availability of reservoir storage and groundwater to help satisfy the additional irrigation need created by less snowmelt and early melting. In some basins, those additional requirements would pose great challenges in trying to make up for changing snowmelt patterns.

“Irrigation demands not met by rainfall or snowmelt currently already represent more than 40 percent of reservoir water storage in many Asian and North American basins,” said Steven Davis, a co-author and associate professor of earth system science at University of California, Irvine. “And in a warming world, agriculture won’t be the only added demand on reservoirs and other alternative water supplies like groundwater.”

In the San Joaquin Basin, findings suggested that 14 percent of irrigation water demand must be met by new alternative sources under a 4-degree Celsius warming scenario. In the Colorado Basin, the figure would be 9 percent.

The study also examined which crops globally were at most at risk because of snowmelt changes resulting from climate change. Findings showed that rice and cotton in northern hemisphere summer, as well as wheat and managed grassland in spring, were particularly snow-dependent.

For the study, researchers used data on monthly rainfall and snowmelt runoff globally from 1985 to 2015 from a dataset called TerraClimate. They then calculated monthly irrigation water consumption for a variety of crops.

They then used climate models to project snowmelt and rainfall runoff in each basin if global mean temperatures rise 2 degrees or 4 degrees Celsius above pre-industrial conditions.

Mueller, who is a researcher in the Department of Ecosystem Science and Sustainability and the Department of Soil and Crop Sciences, notes that the results of the study can help prioritize research and policy attention to identify possible ways to adapt within at-risk basins. “There is no one-size-fits-all solution to the challenges created by changes in snowmelt, and many adaptation options incur tradeoffs,” Mueller said. “Strategies need to be developed regionally in the context of the unique challenges facing each basin at risk.”

The study was supported by the Foundation for Food and Agriculture Research, the U.S. National Science Foundation and the German Federal Ministry of Education and Research.