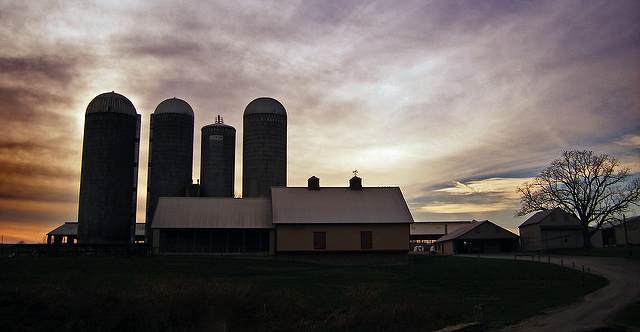 The recommendations range from changing the way dairy feed costs are calculated, to providing farmers greater flexibility in signing up for coverage and using other risk management tools. The four-point plan was developed by NMPF’s Economic Policy Committee, and reflects feedback from dairy producers, economists and members of Congress. (Nicholas A. Tonelli, Flickr/Creative Commons)

ARLINGTON, Va. — The National Milk Producers Federation Board of Directors today unanimously approved a series of recommended changes to the dairy Margin Protection Program that will restore several key elements first proposed by NMPF during development of the 2014 Farm Bill. These changes to the MPP will ensure an effective safety net for the nation’s dairy farmers — if the recommendations are adopted by Congress.

The recommendations range from changing the way dairy feed costs are calculated, to providing farmers greater flexibility in signing up for coverage and using other risk management tools. The four-point plan was developed by NMPF’s Economic Policy Committee, and reflects feedback from dairy producers, economists and members of Congress. It reflects several features originally proposed by NMPF that were subsequently weakened or eliminated as the 2014 farm bill was finalized.

“Improving the MPP to make it a more realistic, effective safety net is a key focus for our membership in 2017,” said NMPF Chairman Randy Mooney. “For dairy farmers to have confidence in the MPP, we need Congress to make these corrections as soon as possible.”

As the conversation about the 2018 farm bill begins to take shape on Capitol Hill, Mooney said that NMPF is hoping for congressional action to implement its proposed changes at the earliest opportunity. Correcting the current program’s deficiencies “will require legislative changes,” he said.

The overall concept of a margin insurance program was developed by NMPF in response to the dairy financial crisis of 2009. The MPP allows farmers to insure against low margins — the gap between milk prices and feed costs — with participants paying higher premiums for higher levels of coverage. Congress incorporated the margin insurance program into the 2014 farm bill, but made several significant alterations that reduced the degree of financial protection farmers can obtain from the MPP, especially as another wave of depressed milk prices hit in 2015-2016.

NMPF’s proposal includes a series of adjustments that will affect the way both feed prices (including corn, alfalfa and soybean meal) and milk prices are calculated. The most needed improvement is restoring the feed cost formula to the one originally developed by NMPF. During Congress’s deliberations on the 2014 farm bill, it implemented a 10-percent cut to the weightings of all three feedstuff components of the MPP feed cost formula, based on an analysis by the Congressional Budget Office. The resulting feed formula understates the price to farmers of producing 100 pounds of milk, thereby overstating the real margins farmers are experiencing.

“Just fixing the feed formula so it returns to its originally-proposed level would have a noticeable impact on the way margins are calculated. That’s the first step in improving the value of the MPP, although there are other changes that will also make a difference in the future,” Mooney said.

In addition to changing the overall feed formula, NMPF also recommends changing the data source for how USDA determines the individual monthly prices of corn, soybean meal and alfalfa hay, as well as how it measures the national average price farmers receive for milk.

Another element in need of change involves the accuracy and affordability of MPP premiums. NMPF is asking for an adjustment to premiums paid into the program for coverage above the basic, $4 margin level. This is necessary to incentivize additional participation by farmers. In 2017, only 7 percent of farms enrolled in the MPP have elected to purchase coverage above $4, and those farms represent only 2 percent of the milk supply.

“This is a significant drop in supplemental coverage since the program started in 2015, and undermines the viability of MPP as a national safety net option,” Mooney said. “MPP has become more expensive for producers than commercial risk management programs.”

Other recommendations include determining margins monthly, rather than bimonthly, and issuing payments on a more frequent basis when margins drop. NMPF is also suggesting to place the deadline for annual enrollment toward the end of the year prior to the calendar year for which they want coverage.

Finally, NMPF recommends that the Livestock Gross Margin program be expanded and that producers be allowed to use both the MPP and LGM simultaneously. Under current regulations, farmers who participate in the MPP cannot also utilize the LGM program for the remainder of the 2014 farm bill, creating a disadvantage for producers. The LGM should complement the risk management offered by MPP, and farmers should be allowed to utilize both tools, Mooney said.

NMPF will be sharing these recommendations with members of the Senate and House Agriculture committees, and urging them to implement these improvements as soon as possible.