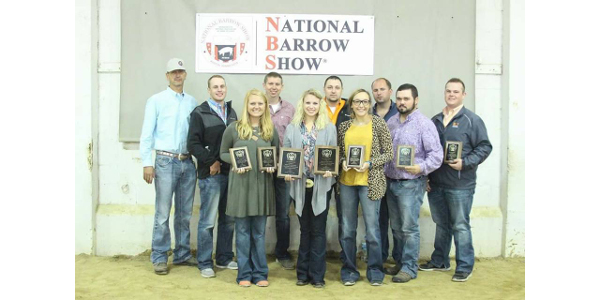 The WIU team placed first in team reasons and was the high team overall. Individually, Will Taylor (Flora, IN) was first in reasons and Jared Lamle (Columbia City, IN) was third in reasons. Overall, Cory Webster (Chrisman, IL) was fifth and Lamle was sixth.

Also on the winning team is Olivia Claire (Watseka, IL), Mikaela Fringer (Madera, CA), Nick Bangert (Bluegrass, IA), Will Blankers (London Mills, IL) and Courtney Scherer (Decatur, IN). The team is coached by Associate Professor of Agriculture Mark Hoge and Hayden Wilder, a former team member who is pursuing his MBA at WIU.

“The team is pleased with this start to the fall, and will continue working hard for the remaining contests, including the Tulsa State Fair (Tulsa, OK), The American Royal (Kansas City, MO) and The NAILE (Louisville, KY),” said Wilder.

The WIU Junior Livestock Judging Team also took two truckloads (six pigs in each load) of University-raised hogs to compete in the Truckload Contest at the Barrow Show. The Crossbred Load was named champion in the Crossbred Truckload class. The Yorkshire Load won second place in the Purebred Truckload class. The WIU team’s juniors also took two Yorkshire Gilts and one Spotted Boar to show and sell as Breeding Stock in the NBS Show and Sale.

Hoge said the annual event is the first team activity juniors take part in, and it helps to prepare them for their transition to becoming members of the senior judging team next year.

For more information about the team, contact Hoge at MD-Hoge@wiu.edu.