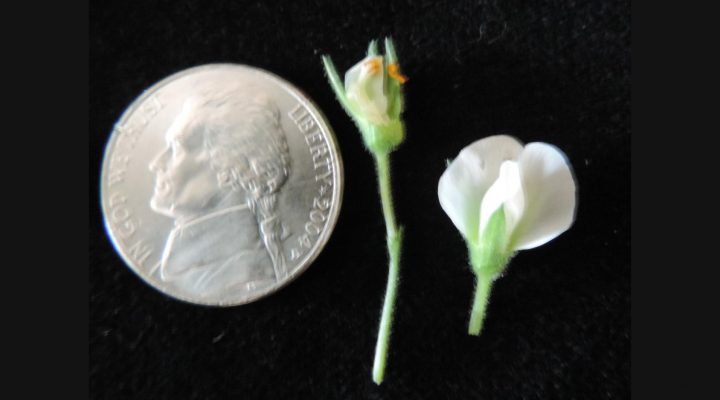 This is an intact (center) chickpea flower suitable as pollen source, and with petals removed (right) showing pollen. (Thomas Stefaniak)

FARGO, N.D. — The small but mighty chickpea packs a dietary and environmental punch. They are an important source of nutrition, especially protein, for billions of people across the world. Additionally, bacteria that live in root nodules of chickpea plants pull in atmospheric nitrogen, increasing soil productivity.

But breeding new varieties of chickpeas with desirable traits – such as increased resistance to diseases and pests – is difficult. In fact, it is “tedious and inefficient,” says Thomas Stefaniak, a researcher at North Dakota State University.

In a new study, Stefaniak and his colleague Kevin McPhee evaluated four combinations of breeding methods and tested whether they increased the success rate of crossing chickpeas.

Crossing uses two individual plants to create a more desired offspring. Ultimately, this allows breeders to select for plants with beneficial traits, such as higher yields.

Chickpea plants are particularly difficult to cross. It is unclear what causes most crossing attempts with chickpeas to fail. “A common assumption is that chickpea flowers simply do not like to be touched by human hands,” says Stefaniak.

But researchers often have to touch the flowers when they are trying to cross chickpea plants. That’s because chickpea flowers have both male and female reproductive organs. When pollen from the male organ lands on the female organ of the same flower, it can lead to self-pollination and inbreeding.

To reduce the chances that chickpea plants self-pollinate, researchers can remove the male part of the flower that contains the pollen – the anther. They use a pair of forceps to cut the anther before the pollen has a chance to land on the female organ.

Stefaniak and McPhee found this process – called emasculation – does not increase cross-pollination in chickpeas. In fact, it seemed to lower rates of successful pollinations, which would impede breeding progress.

The researchers also tried applying a cocktail of hormones to chickpea flowers. Previously, these hormones had been shown to increase the crossing efficiency between wild and cultivated species of chickpea. But Stefaniak and McPhee found no significant increase in crossing success when they used the hormones.

The researchers also tried a combination of emasculation and hormone treatment. Again, they did not find any increase in crossing efficiency.

According to the authors, “The results of this study do not support using emasculation, hormone treatment or a combination of the two to improve crossing efficiency in chickpea.”

These results are important. Emasculation and hormone treatment require a lot of time and effort. This study shows that investing in these methods may not pay off.

Stefaniak is now turning his attention to other factors that may increase crossing efficiency. “I would like to test different environmental conditions, both in the field and greenhouse,” he says.

Future studies will examine how ambient light, temperature, and humidity may be influencing the efficiency of crossing chickpea plants.

Developing new and efficient ways to cross chickpea plants will help farmers in regions where it is currently grown. It may also lead to the expansion of chickpea cultivation and consumption in new areas.

The vast majority of chickpea produced globally is consumed in the developing regions of Asia. People in other parts of the world would benefit by incorporating more chickpea in their diets “due to its relatively high fiber, low fat content, and high quality protein,” says Stefaniak.