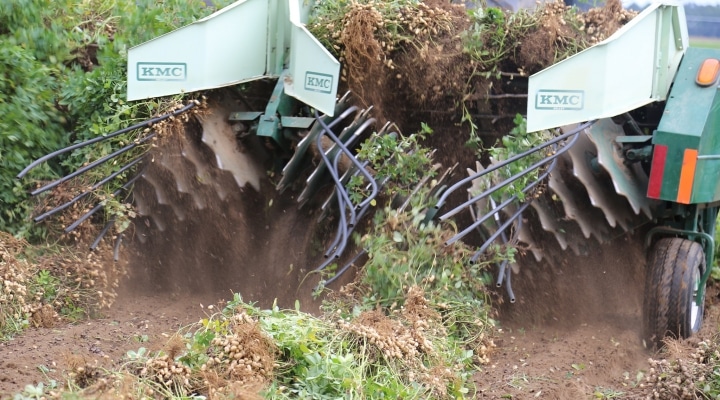 Weather, market disruptions and COVID-19 pandemic effects are all weighing on the minds of Georgia farmers as they move into the heart of the fall harvest season. (photo by UGA CAES/Extension, Creative Commons/flickr.com)

MACON, Ga. –Weather, market disruptions and COVID-19 pandemic effects are all weighing on the minds of Georgia farmers as they move into the heart of the fall harvest season.

Peanut farmers are optimistic about their crop for several reasons – dry weather this summer resulted in lower disease pressure and cooler weather in September will hopefully translate into lower aflatoxin levels in the crop.

In Mitchell County, Meredith Rogers said her family is looking at a good peanut crop overall barring any more storms like Hurricane Sally that moved across Georgia Sept. 16-17.  Although she expects early dry summer weather will cost them half the yield of their non-irrigated crop, there’s a silver lining.

“It was dry this summer so there wasn’t as much disease pressure.  We’ve been able to keep leaf spot and white mold in check,” Rogers said. “We have mostly irrigated fields so overall we’ll be okay.”

The USDA’s  Sept. 21 Georgia Crop Progress & Condition Report shows that Hurricane Sally drenched peanut fields west of I-75 with between 5 to 12 inches of rain, while peanut growers along the interstate and in the Southeast section of the state received mostly 5 inches and less with two areas getting up to 7.5 inches.

“Sally had more of an affect west of I-75 from what I’m hearing,” said Don  Kohler, executive director of the Georgia Peanut Commission.

Kohler said Georgia’s peanut crop was already running late due to the wet, cool weather growers experienced in the spring. The soggy fields Sally left behind definitely delayed the start of harvest while providing a good last rain to complete the crop.

“Usually the first day of fall we’re going wide open [digging peanuts]. By the first of October we will be running wide open,” Kohler said. “Overall, Sally may have helped finish filling out some peanuts. I think most everyone had time to go in and apply another application of fungicide before Sally got here to deal with disease issues. I think we’re set to have a reasonably good harvest.”

In Macon County, Donald Chase is hoping September’s cooler weather translates into lower aflatoxin levels for Georgia’s overall peanut crop. As a director for the Georgia Peanut Commission he’s concerned that higher aflatoxin levels (presence of fungus in crop) could prevent the crop from being exported to Europe where their acceptable levels are much lower than the U.S., Canada and Mexico.

“The last two years September has been the hottest month of the year. When we have hotter and dryer conditions we tend to get aflatoxin. This year the temperature has been moderate and fortunately we’ve got a good clean crop right now [Sept. 21],” Chase said.

The state’s cotton producers were looking for strong crop until Hurricane Sally swept through Georgia in mid-September. Fortunately, Sally didn’t bring the widespread wind damage like Hurricane Michael in 2018, but heavy rains could result in quality loss, according to Georgia Cotton Commission Executive Director Taylor Sills, who described the expectations for the crop as cautiously optimistic.

According to Sills, the soggy conditions seemed to be the key problem.

“What we really need is for it to warm up a little bit, dry out, let that cotton … it’s a fantastic crop. It can do a lot of things on its own, if we can just get some good solid weather, sooner rather than later, we should be in decent shape.”

Meanwhile, Georgia’s pecan growers are still struggling with lingering effects from Michael along with market disruptions in both export and domestic markets.

“This year it looks like the trees have responded,” Worsham said. “We’re looking at a good crop. I don’t know that it’s 100 percent, but I would say we’re probably 60% to 70% recovered in terms of production potential.”

NASS is surveying Georgia pecan growers about their 2020 production and plans to release the first results on Oct. 13.

Pecan growers face a two-headed market monster. Internationally, China has halted its purchases of U.S. pecans. Typically, 70% or more of Georgia-grown pecans are exported, and the largest portion of those purchases are by Chinese buyers. Stateside, imports of Mexican pecans are shaking up the domestic market. Mexican growers’ production costs are much lower than those of U.S. producers, which means the Mexican nuts can be sold at much lower prices, which closes off much of the U.S. market.

“We had a great market going into China, then all of a sudden the hurricane came, and all this political upheaval and COVID and all that going on, it seems to have really destroyed that market, at least temporarily,” Georgia Pecan Growers Association President Miley Adams said. “Hopefully not permanently. It’s a good market for this part of the country.”

Adams and other pecan leaders were hopeful that some of the loss of the Chinese market can be offset by selling nuts to India, but it would require India lowering or eliminating tariffs on U.S. pecans.

Adams noted that an estimated 300 million pounds of Mexican pecans will be imported to the U.S. this year, while the total U.S. crop is expected to be 287 million pounds.

“I’m going to say it is our biggest problem,” said Southern Pecan Growers Association Past President Bobby Bostick. “If we could get the Mexican imports handled, I think the market will take care of the rest of it.”

“We’ve got a huge crop this year, we’re scratching our heads what we’re going to do with it,” said Bostick, who said he hasn’t sold a crop since 2017. “We all want to harvest and sell our crop.”