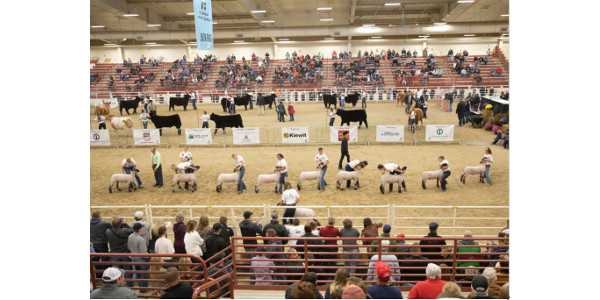 GRAND ISLAND, Neb. — The 94th Aksarben Stock Show held its first ever Grand Drive in Grand Island, Nebraska with a full house watching as Champions were selected in beef, swine, sheep, goats, and broilers. There were 2,326 exhibitors from 14 States that exhibited Swine, Sheep, Beef, Goats, and Broilers. Sponsors were on hand to present scholarships/premiums to 52 accomplished exhibitors totally over $152,000. Scholarship/Premiums were presented to winners in all species. Another segment of the Aksarben Stock Show was the Challenge Program. Challenge Champions were crowned in the calf, lamb, and pig areas. This year’s show had 46 entries that were supported by 46 Sponsor/Partners.

The Challenge Program is a highly educational program that encourages youth to learn more about feeding, health, and care of their animals. They also go through a live interview process that allows youth to communicate their knowledge of the entire program. Earlier this year individuals drew for their animal at a distribution site. After returning home with their animal, they cared for and trained their projects in preparation for exhibition at the Aksarben Stock Show. Scores were tabulated that included record book, sponsorship communication, live placing, showmanship, average daily gain, and live interview. The Challenge animals were provided by Wagonhammer Ranches (Calf), Burch Livestock, LLC (Lamb), and Zimmerman Hog Farm (Pig).

The 95th Aksarben Stock Show will be held Sept. 23-26, 2022 at Fonner Park in Grand Island, Nebraska. The show moved from Omaha to Grand Island in 2017. It is being managed and produced by the Nebraska State Fair.