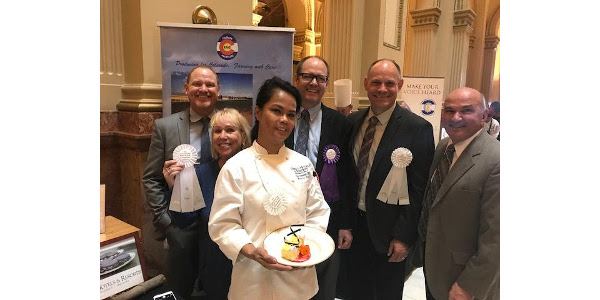 DENVER — The “most popular event under the Golden Dome” was once again a success, as Gov. John Hickenlooper, state officials, the media and others took part in a well-deserved “thank you” to Colorado’s farmers, ranchers and agribusinesses during Agriculture Day at the Capitol in March.

The event came together with the help of Colorado Egg Producers (CEP) personnel. CEP Industry Relations Manager David Collie — who also owns and operates Collie Consulting LLC — took the lead among the organizations that make up the Colorado Ag Council, to organize the event, while CEP Executive Director Bill Scebbi, CEP Outreach Events Coordinator Terri Heine and CEP Board Vice President Jerry Wilkins were also on hand to assist. Additionally, Ted Greidanus of Opal Foods — which is a CEP member farm — was on hand for the fun.

With hundreds of people in attendance, the event was highlighted by a cook-off competition, featuring the teaming up of local chefs, lawmakers and ag representatives, creating dishes with Colorado-grown foods.

The CEP’s two teams took first and third places in the 15-team cook-off competition, under the guidance of Chef David Lewis from Miette et Chocolat and Chef Emma Nemechek of Omni Interlocken Resort.

Each year, Colorado’s Agriculture Day at the Capitol takes place during National Ag Week, and showcases all that Colorado’s industry does for our state, highlighting its efforts in feeding Colorado’s 5 million-plus people, its stewardship of our resources, and its $40 billion economic impact — a top three contributor to the state’s economy each year.

Enroll in MaternalPlus and be rewarded