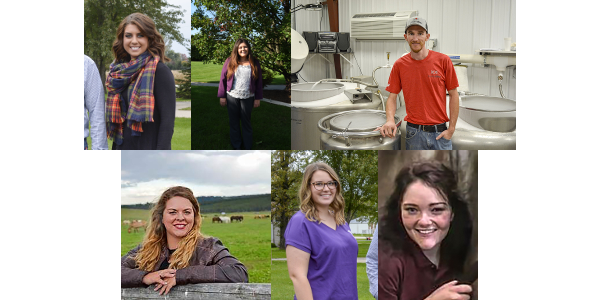 WAUPUN, Wis. — During the previous months, CentralStar Cooperative, serving dairy and beef producers in Wisconsin, Michigan, and Indiana, has promoted a group of employees and created new career opportunities for many agriculture enthusiasts in the upper Midwest.

Congratulations to Sam Nigon, Spencer, Wis., and Josh Edge, Stanley, Wis., on their promotions from team artificial insemination (A.I.) technicians to full-time A.I. specialists; both now manage their own customer groups of dairy and beef producers. Jen Krull, Conover, Wis., has also been promoted to a full-time split role; she now works in both the A.I. and Dairy Herd Information (DHI) portions of the CentralStar business structure.

Dan Row, Janesville, Wis., has been hired as a full-time A.I. specialist. He took over for an employee who recently retired in southern Wisconsin.

CentralStar has many genetic, reproductive, dairy-record consultants on staff to help dairy farmers excel in these areas of their businesses. Lauren Hendel, Sun Prairie, Wis., has been hired as a genetic consultant in the south-central Wisconsin area. She is working with existing genetic consultants to learn from their experience and apply it to the herds she works with.

In the DHI arm of CentralStar cooperative, the modern DHI specialist is an integral part of a dairy farm’s professional consulting team. Vast information impacting herd productivity, cattle health, animal welfare, sustainability, and profitability can conveniently and accurately be revealed with just a few ounces of milk. CentralStar has hired Cassandra Wade, Saginaw, Mich., and Kelsey Hoffman, Clarksville, Mich., to fill open positions in this area.

Finally, CentralStar has two office locations, one in Waupun, Wis., and one in Lansing, Mich. Patty Browne, Lansing, Mich., has been hired in the Lansing office to help in the accounting department.

Congratulations to this group of employees. Even though the agriculture industry is experiencing some tough economic times, it’s encouraging to see the career opportunities available for those who want to work directly with dairy and beef producers to help each farm maximize success.

In addition, December graduations at area universities are fast approaching, and many young adults are set to begin their careers at CentralStar Cooperative. Watch for more details in the new year about those who’ve chosen CentralStar as their employee family.