Home / California / Center for Produce Safety key supporters
A new user experience is coming! We'll be asking you to login to your Morning Ag Clips account March 1st to access these new features.
We can't wait to share them with you! Read more here. 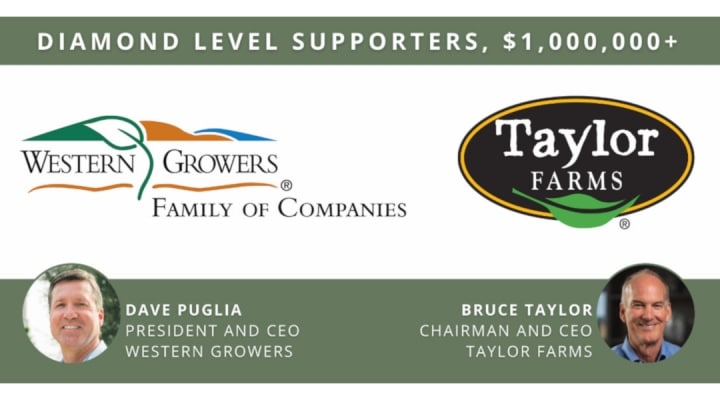 And while the two contributors’ business structures are very different, their motivations for supporting CPS are the same: to safeguard consumers and the industry’s future, by improving produce safety knowledge.

Taylor Farms and Western Growers are the first Diamond ($1,000,000+) level supporters to sign on to a capital fundraising campaign that Center for Produce Safety unveiled in late January; the campaign began quietly in late 2020. CPS has now raised over $5 million toward its $15 million goal to finance produce-specific food safety research, and to transfer research learnings to industry, government and other stakeholders, over the next five years.

Dave Puglia, president and CEO of the trade association Western Growers, ranks food safety as a “top-level threat” to the fresh produce industry. The association also contributed $1 million to CPS in 2015 during CPS’s previous campaign.

“We are in an era of greater transparency, and the high expectations that come with transparency about how this industry operates and the standards that it adheres to,” Puglia said. Along with labor and water, “food safety has joined a triumvirate of challenging issues that need our full attention.”

Bruce Taylor, chairman and CEO of the fresh-cut processing giant Taylor Farms, similarly noted what’s at stake for industry members and their brands.

“Produce safety is important to us because one in three Americans enjoy Taylor Farms’ healthy, fresh foods every week,” he said. “It is critical that we continue to earn our consumers’ trust by producing very safe food.”

Taylor pointed to CPS’s success to date to make the case for supporting the center’s continued work. Taylor Farms co-founded CPS with Produce Marketing Association in 2007 with a $2 million contribution, and gave another $1.25 million to CPS’s 2015 campaign.

“We are delighted to see the amazing progress in research and practical application of food safety knowledge that is being driven by Center for Produce Safety,” said Taylor. “We’ve seen a consistent track record of success with their research programs, and their ability to communicate to the industry. That’s just as important – research without communication doesn’t help anybody.”

“For us, investing in Center for Produce Safety promises to deliver practical, science-based solutions to enhance food safety practices that will be realized by technology in many cases,” Puglia said. “On the other side, the technologies that don’t exist today can get us those practical food safety solutions. We are invested in bringing those new technologies forward quickly. The two have power together.”

Both executives called on their counterparts across the fresh produce supply chain to step up and join them in supporting Center for Produce Safety’s future.

“One, open your checkbook,” said Puglia. “And two, pay attention to the work being done within CPS. Don’t assume that because some really talented food-safety experts are keeping their eyes and their brains engaged with CPS, that covers all the bases.

“The practical impacts of CPS-funded research have to be understood by everybody in the industry, including the people who grow, the people who harvest, the people who market the product,” Puglia said. “Help shape Center for Produce Safety’s research portfolio, and guide its priorities.”

“The future is in our collective hands,” stressed Taylor. “It is incumbent on us as an industry to do everything we can to win consumers’ trust.”

As of March 1, 2021, the following companies have generously contributed to CPS’s new fundraising campaign. A current list of contributors can be viewed at www.centerforproducesafety.org/2020-campaign.php.

Many industry organizations have supported CPS since it was founded in 2007. A complete list of contributors to CPS’s 2015 campaign can be viewed at www.centerforproducesafety.org/2015-campaign.php.