Home / National / Center aims to provide alternatives to synthetic nitrogen fertilizer
A new user experience is coming! We'll be asking you to login to your Morning Ag Clips account March 1st to access these new features.
We can't wait to share them with you! Read more here. 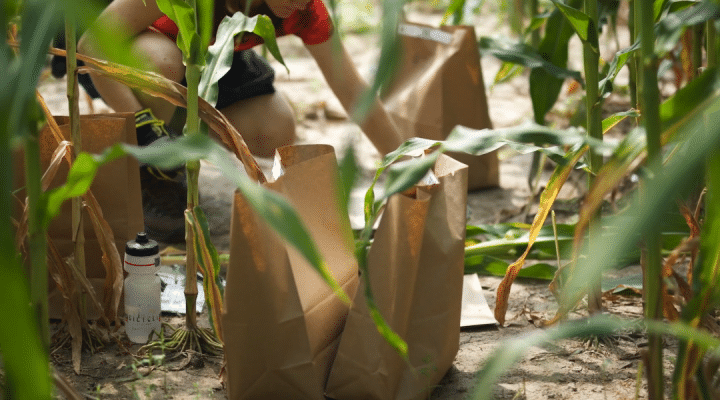 The SINC Center aims to improve the sustainability of agriculture by developing technologies to track the flow of nitrogen and carbon across plant roots, discovering novel beneficial microbes, and understanding the genetic mechanisms that influence these interactions. (The Donald Danforth Plant Science Center, YouTube)

ST. LOUIS, Mo. — Synthetic nitrogen fertilizer is a major contributor to climate change and environmental pollution. Modern day agriculture was not developed to be highly nitrogen efficient and growers apply 22 million pounds of nitrogen fertilizer to crops in the U.S. annually, according to the Environmental Protection Agency.  Scientists at the Donald Danforth Plant Science Center have established a new Subterranean Influences on Nitrogen and Carbon (SINC) Center of Excellence to address this global challenge. The SINC Center aims to develop technologies to decrease the use of nitrogen fertilizer, a major contributor to greenhouse gas emissions, by 12% without the loss of crop productivity. Such a reduction in the U.S. would be equivalent to taking 10 million cars off the road.

“Everybody knows about carbon dioxide as a greenhouse gas,” said Rebecca Bart, PhD, associate member, Danforth Center and director of the SINC Center. “Nitrous oxide is released from agriculture fields, and as a greenhouse gas, is nearly 300 times more potent than carbon dioxide. Excess nitrogen applied to fields also pollutes the environment through runoff into waterways and oceans.”

Nitrogen is essential for all life on Earth but is mostly found in chemical forms that crops cannot use. Some crops, such as soybean, form symbiotic associations with bacteria, where the bacteria convert atmospheric nitrogen into accessible forms of nitrogen that plants can use. Other microbes in soil promote nitrogen cycling, uptake of nutrients and plant health. The SINC Center aims to improve the sustainability of agriculture by developing technologies to track the flow of nitrogen and carbon across plant roots, discovering novel beneficial microbes, and understanding the genetic mechanisms that influence these interactions.

“The SINC team brings exceptional scientific expertise to bear on a great challenge of our time,” said Jim Carrington, PhD, president and CEO of the Danforth Center. “Committing to lower the impact of agriculture on climate change is something we simply must do.”

The SINC Center was made possible by a generous donation from Philip and Sima Needleman. Dr. Needleman has served on the Donald Danforth Plant Science Center Board of Directors since 2005. Bank of America recently awarded a $250,000 grant to support the SINC Center.

“Sima and I recognized that a catalytic gift would enable a highly competent team to cross disciplines and collectively attack this major agricultural challenge,” said Needleman. “The scope of this effort requires massive, multivariate datasets to elucidate the interplay of soil microorganisms, plant and microbe genetics, soil chemistry, and the influence of climate. The team is now focused on making predictions and testing hypotheses for the best and fastest methods to markedly improve atmospheric nitrogen utilization.”

“Solving climate change is the path to transforming our food supply,” said Marilyn Bush, Bank of America St. Louis market president. “The Danforth Center is leading groundbreaking work to produce more food with less greenhouse gas pollution, and it’s all happening right in our backyard, which is why we are proud to support them.”

Hear from our SINC Center team about their work to address climate change.

Founded in 1998, the Donald Danforth Plant Science Center is a not-for-profit research institute with a mission to improve the human condition through plant science. Research, education and outreach aim to have impact at the nexus of food security and the environment, and position the St. Louis region as a world center for plant science. The Center’s work is funded through competitive grants from many sources, including the National Science Foundation, National Institutes of Health, U.S. Department of Energy, U.S. Agency for International Development, and the Bill & Melinda Gates Foundation. Follow us on Twitter at @DanforthCenter.