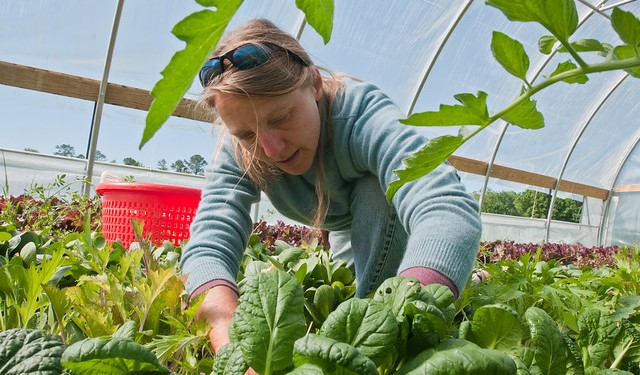 Nationally the number of organic farms counted in 2017 jumped to 18,166, which is up from 14,326 in 2012. The total value of sales of organic products more than doubled during the same time frame, from $3.12 billion to $7.2 billion. (U.S. Department of Agriculture, Public Domain)

AUGUSTA — The U.S. Department of Agriculture (USDA) recently released the 2017 Census of Agriculture. The census, which is conducted by the National Agricultural Statistics Service (NASS) every five years, shows continued and significant growth in the organic sector.

In line with the national trend, the value of organic products in Maine shows significant growth. The total organic product sales for the state grew by approximately $23 million since 2012 to $60 million. Per farm organic sales in the state show a similar upward trajectory, with the average per farm total organic product sales calculated at $108,744 as compared to the average per farm market value of products for all other farms in the state, which dropped six percent since 2012 to $87,758. The numbers for organic production shine a bright spot on a report that ultimately shows some concerning trends in Maine and nationally.

Those trends include the following:

These trends are obstacles that require policies and resources that support organic producers as well as those transitioning to organic production as a clear path toward revitalizing agriculture. The 2017 census ranked the state of Maine third in the nation for the number of beginning farmers, which offers proof that support programs like MOFGA’s beginning farmer programs can work to reverse these trends.

A recent survey of graduates of MOFGA’s Journeyperson Program, which assists farms that have been operating for fewer than 10 years, found that 92 percent of respondents are still farming and 87 percent are doing so in Maine. Graduates of this program are farming in all 16 Maine counties, and they are farming more than 10,000 acres throughout the state. These farms have created nearly 800 paid jobs and $10 million in annual sales.

Despite these encouraging numbers, policies and resources to support farms represent only one component of the work that needs to be done. All of us play a significant role in creating positive change with our daily food choices. The census indicates that the number of consumers purchasing local foods directly from a farmer grew by 114 percent nationally, and sales to local and direct markets are growing, although they still represent a small fraction of total sales. Ensuring continued growth of the agricultural community in Maine starts with purchasing foods and other agricultural products that are certified organic by MOFGA, thus supporting local organic growers. Search for MOFGA certified producers here.

Additional evaluation of census data will be included in the summer issue of MOFGA’s newspaper, The Maine Organic Farmer & Gardener.

The Maine Organic Farmers and Gardeners Association (MOFGA, www.mofga.org), formed in 1971, is the oldest and largest state organic organization in the country. MOFGA is a broad-based community that educates about and advocates for organic agriculture, illuminating its interdependence with a healthy environment, local food production, and thriving communities.