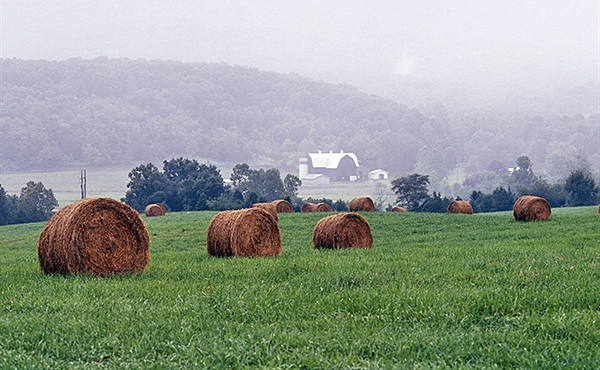 Farming and forestry in Virginia have a total economic impact of $91 billion, according to a 2017 study by the Weldon Cooper Center for Public Service. (Virginia Farm Bureau Federation)

RICHMOND, Va. — Virginia’s political leaders may now take a closer look at the importance of agriculture in their congressional districts, thanks to the 2017 U.S. Census of Agriculture.

A breakdown of the number of farms and farmers in each congressional district in the nation was released June 26.

“The census shows that agriculture is not only the largest industry in Virginia, but it is an industry that exists in all 11 of the commonwealth’s congressional districts,” said Ben Rowe, national affairs coordinator for the Virginia Farm Bureau Federation. “The census data not only shows that the jobs, income and revenue provided by these tens of thousands of farms are the lifeblood of rural Virginia, but also serves as a reminder that whether you are on the Eastern Shore, in the coalfields region or Virginia’s Urban Crescent, agriculture is an important component of the economy.”

Farming and forestry in Virginia have a total economic impact of $91 billion, according to a 2017 study by the Weldon Cooper Center for Public Service.

District 9 in Southwest Virginia is the state’s highest-ranking congressional district in the nation, placing 52nd out of 431 districts in the U.S. House of Representatives. Rep. Morgan Griffith has 11,933 farms in District 9, and cattle and calves are the predominant type of agriculture there.

“Agriculture is a way of life in Virginia’s 9th Congressional District,” Griffith said. “The new Census of Agriculture reaffirms that fact and highlights just how much the district contributes to Virginia’s farm economy.”

Virginia’s District 5 is ranked 55th. Rep. Denver Riggleman has 11,408 farms in the district, which runs from the traditional heart of tobacco country in Southside Virginia up the eastern side of the Blue Ridge Mountains to just west of Northern Virginia.

District 7 in Central Virginia is ranked 189th and is the fourth-largest farm district in the commonwealth. Rep. Abigail Spanberger has 3,235 farms in her district and serves on two subcommittees of the House Agriculture Committee.

“On more than 3,000 farms across our district, crop and livestock producers are working hard to strengthen our rural economy and to feed the American people,” Spanberger said. “These fresh statistics from USDA provide valuable insight into the economic health and well-being of our family farms — and I’ll use this data to inform our work in Congress as we fight to provide our farmers with the regulatory conditions, farm safety net and flexibility they need to be successful long into the future.”