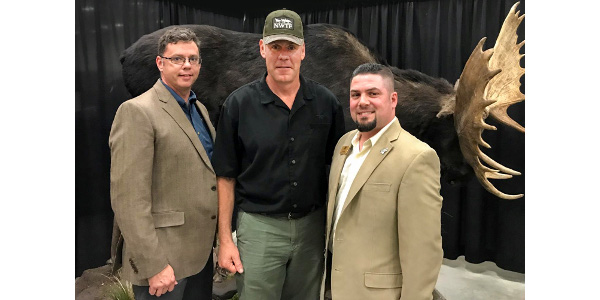 “Secretary Zinke reiterated his strong support for our hunting and fishing traditions and said the Department of Interior is committed to managing our federal lands for the benefit and enjoyment of sportsmen and the general public,” DiBona said.

The Federal Aid in Wildlife Restoration Act, which is commonly referred to as the Pittman-Robertson Act, was established in 1937 and imposes a tax on firearms, ammunition, archery and fishing equipment. Those funds are then returned to each state to manage wildlife and habitats.

“The Wildlife Restoration Act was landmark legislation 80 years ago that provided funding to all fifty states for conservation,” said Becky Humphries, CEO of the National Wild Turkey Federation. “It is still the largest source of funding for conservation and has led to the restoration of many species, including the wild turkey.”

Since its inception, the act has collected $11 billion for wildlife conservation. In addition to helping restore the wild turkey, the funding has helped restore additional species such as white-tailed deer and wood ducks.

The meeting and announcement was held at the local Bass Pro Shops in Hooksett, New Hampshire. Bass Pro Shops’ founder, Johnny Morris, is considered one of the nation’s leading conservationists.

About the National Wild Turkey Federation

When the National Wild Turkey Federation was founded in 1973, there were about 1.5 million wild turkeys in North America. After decades of work, that number hit an historic high of almost 7 million turkeys. To succeed, the NWTF stood behind science-based conservation and hunters’ rights. Thanks to the efforts of dedicated volunteers, professional staff and committed partners, the NWTF has facilitated the investment of $488 million in wildlife conservation and the preservation of North America’s hunting heritage. The NWTF has improved more than 17 million acres of wildlife habitat and introduce 100,000 people to the outdoors each year. The NWTF Save the Habitat. Save the Hunt. initiative is a charge that mobilizes science, fundraising and devoted volunteers to raise $1.2 billion to conserve and enhance more than 4 million acres of essential wildlife habitat, recruit at least 1.5 million hunters and open access to 500,000 acres for hunting. For more information, visit NWTF.org.