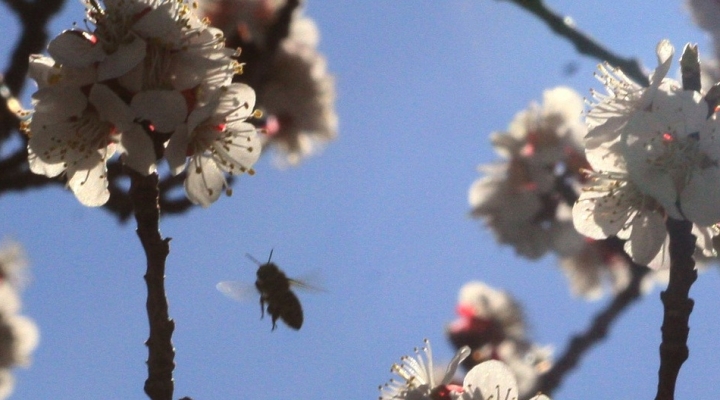 Pollinators are critical to both the state's environment and agricultural economy. (naturalflow, Flickr/Creative Commons)

This week, New York State is celebrating with several events highlighting the importance of key pollinator species such as bees, butterflies, and hummingbirds. Pollinators are critical to both the state’s environment and agricultural economy. In 2016, a state agency task force released a comprehensive Pollinator Protection Plan to guide actions by state agencies and the public to protect New York’s pollinator populations.

DEC Commissioner Basil Seggos said, “Pollinators are keystone species, and their protection is essential to the health of New York’s crops and natural resources. DEC has enthusiastically embraced the challenge of incorporating pollinator protection into our ongoing efforts statewide. I thank Governor Cuomo for his leadership in designating this week as Pollinator Week and for supporting our efforts to maintain healthy pollinator populations.”

State Agriculture Commissioner Richard A. Ball said, “Through Governor Cuomo’s leadership and the collaboration with our fellow state agencies, stakeholders and top research institutions, New York is leading the efforts to protect pollinators.  These species provide significant contributions to our agricultural industry, and as we better understand the factors that can harm pollinator populations, we will continue to implement new strategies to safeguard their health and habitats.”

The New York State Departments of Environmental Conservation and Agriculture and Markets led the Pollinator Protection Taskforce, which examined and developed short and long-term solutions to address pollinator losses in the state and develop a statewidePollinator Protection Plan. The number of pollinators, including honey bees, native bees, bats, hummingbirds and butterflies, has dropped significantly over the past 50 years. Losses are likely caused by a combination of factors such as poor nutrition, loss of foraging habitat, parasites, pesticides, pathogens, lack of genetic diversity and poor land management practices. Co-chaired by Commissioners Basil Seggos and Richard Ball, the taskforce consists of agency officials from the Department of Agriculture and Markets, DEC, Department of Transportation, Thruway Authority, Office of General Services, State Parks, and key stakeholders.

In its report, the Taskforce emphasized the need for comprehensive, state-focused research to better understand the status of native pollinators in the State and the factors that impact both managed and wild pollinator health and performance. The 2016-17 New York State Budget included $500,000 from the Environmental Protection Fund (EPF) for pollinator protection initiatives.  As recommended by the Task Force, the funding is being used to survey the status of New York’s wild bees, create pollinator-friendly habitat, and conduct additional research on the impacts of potential pollinator stressors, as well as the effects of bee-husbandry practices on the performance of managed hives. The funding also supported the establishment of the New York’s Tech Team for Beekeepers, led by Cornell University.

Since the announcement of the Pollinator Protection Plan in June 2016, three research projects led by Cornell University and the Tech Team program have explored the impact of parasites, pathogens, pesticides, landscape, and management practices on pollinator health. Wild bee research included assessment of landscape and farming practices on bumble bee colonies; the first of two honey bee research projects looked at pesticide risk from 120 experimental honey bee hives placed in 30 New York apple orchards; and a second project included 60 beekeepers who volunteered to have the health and management practices of their more than 300 colonies’ surveyed.  Thirty of the beekeepers who participated in the research projects were also enrolled in the Tech Team program, which is providing participating apiaries with site-specific technical support.  Their colonies produced approximately one-third of the statewide honey production in 2016.  The second year of sampling for the Tech Team is currently underway.  More information about the Tech Team and its 2016 research results can be found here.

The 2017-18 New York State Budget includes an additional $500,000 to further these research efforts, which are being applied to the state’s beekeeping industry to develop best management practices aimed at reducing honey bee colony losses and improving the profitability and viability of beekeeping businesses.  The survey of native pollinators will continue for a second year, as well.

Following recommendations from the Pollinator Protection Plan, seven state agencies are working closely to implement new and enhance existing actions to promote the health and recovery of pollinators in New York State.  Agencies are reducing their use of pesticides and herbicides that could be harmful to pollinators, planting and restoring pollinator habitats in key areas across the state, increasing pest management efforts and invasive species removal projects, and developing educational materials to raise awareness about the importance of pollinators and how we can protect them.

For example, State Parks have launched more than one dozen projects to promote the health and recovery of pollinators. The Thruway Authority will reduce mowing on 225 additional acres of land, it planted 16 acres of wildflowers, and added more than 2,000 feet of living snow fences to help restore wild pollinator habitats along the NYS Thruway. The Department of Transportation has also delayed mowing along the State’s highways until after the seasonal migration of monarch butterflies, and prioritized planting of flowers, shrubs and trees to maintain pollinator food sources. It is also developing and testing soil and nutrient combinations that encourage root growth in nectar-producing plants and working with its partners to share research, including the development of seed mix packages that can withstand roadside stressors.

In addition, the Office of General Services and DEC have established an interagency committee to develop a procurement list for sustainable commodities, services and technology to be used by state agencies.  In developing the list, the committee will consider the impact of these goods and services on pollinators. The committee will also draft progress reports on the adoption of sustainable practices by state agencies and how those practices are influencing pollinator populations in the State.

State Parks Commissioner Rose Harvey said, “Pollinators are always busy keeping our environment strong and healthy. I commend Governor Cuomo and our partners across the state for their efforts to safeguard pollinator populations and spread the word about the impact pollinators have on everyday life.”

Kathryn J. Boor, Dean of the College of Agriculture and Life Sciences, Cornell University, said, “Insect pollinators are the often unheralded but always crucial partners we rely on for many of the fruits and vegetables grown in New York. A healthy bee population is vital to our state’s growers and everyone who enjoys the food they produce. Here at Cornell, we are developing solutions that protect honey bee colonies and the agricultural economy. I applaud Governor Cuomo for bringing attention to how pollinator health affects our state.”

Pollinators contribute substantially to the state’s economy. According to the U.S. Department of Agriculture, pollinators provide approximately $344 million worth of pollination services to New York and add $29 billion in value to crop production nationally each year. New York’s ability to produce crops such as apples, grapes, cherries, onions, pumpkins and cauliflower relies heavily on the presence of pollinators.