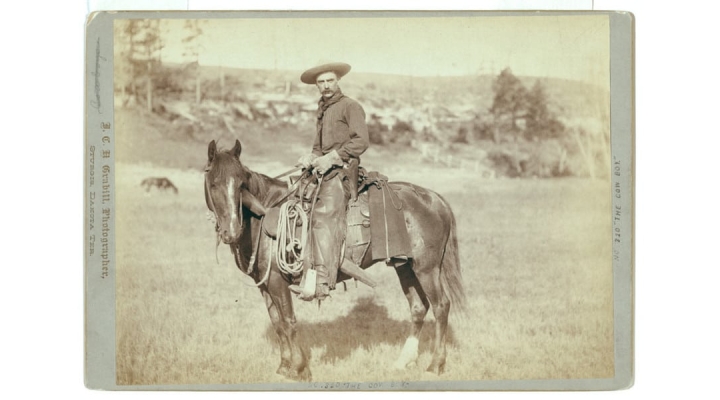 GREENWICH, N.Y. — Editor’s note: Morning Ag Clips is pleased to announce the launch of a new series of historical articles from our resident historian and editor, Chandler Hansen. Have a topic you’d like to hear more about? Email us at info@morningagclips.com!

May is Beef Month, which is a perfect opportunity to recognize the U.S. beef industry and celebrate the farmers and ranchers who raise and care for cattle day in and day out. In honor of Beef Month, let’s look back on the cattle drive boom of the late 19th century. While only existing for a short period of time, the cattle drives left a clear “brand” upon American agriculture and popular culture that exists today.

Cattle drives had been happening in Texas and parts of the Southwest since the time that the region was still a Spanish territory. The area boasted both domesticated herds that were moved on ranges and feral cattle that roamed in the area. In the 1850s more organized cattle drives began happening, moving cattle to places like California after the discovery of gold brought more people to the west coast. However, the outbreak of the Civil War dampened these drives.1

The cattle drives as they are remembered today began in 1866. The economy of Texas, like the rest of the South, was in a bad spot after emerging on the losing end of the Civil War, however they had a high supply of cattle. On the other hand, the North was more prosperous from winning the war but they were low on beef. This mutual need led to organized cattle drives where northern buyers would purchase Texas cattle that were driven by cowboys to railheads in the Midwest. The cattle would then be shipped via railroad to eastern and northern markets. Cattle that could be purchased for around $5 a head in Texas could be sold for anywhere from $25 to $45 a head in the east, so businessmen were eager to get in on this potentially profitable market.2

Originally, drives went to previously established railroad depots in places like Sedalia and St. Louis, Missouri, and places in Louisiana. But cattle from Texas unfortunately brought with them a tick-borne illness which was called “Texas Fever.”3 While Texas cattle were immune to this disease, it ravaged cattle in other states leading to states like Missouri and Arkansas to eventually ban Texas cattle from their states.

This development plus the continual westward expansion of railroads led to cities further west becoming the end site of cattle drives. Eventually well-established trails were developed by cowboys and their herds. Some of the more famous ones include the Chisholm Trail, which led cowboys and their herds from Texas through present-day Oklahoma (then Indian Territory) and ended in Abilene, Kansas, and the Goodnight-Loving Trail which traveled through New Mexico to bring cattle to endpoints like Denver, Colorado or Cheyenne, Wyoming.

Cattle drives usually lasted 3-5 months, and a crew of 10-15 cowboys would herd a large number of cattle. Herds of 2,000 to 4,000 were typical during this time. Cowboys would be spread out along the massive herd of cattle using hand signals to communicate with one another.4 Cowboys came from all different social and racial backgrounds and were paid $30-40 a month. It was not an easy job. Cowboys faced long days on horseback, little sleep as drovers would take turns watching the cattle at night, extremes in the weather, dust that covered every part of them, and poor food (some staples on the trail included bacon, beans, biscuits, and coffee). While the cowboy life is often depicted as exciting and adventurous, boredom and drudgery were their constant foes on the trail riding day after day.

There were elements of danger cowboys faced though. Crossing swollen rivers, corralling loose cattle, and stampedes were dangers that came with herding the cattle. Though less prevalent, raids from Native American tribes or bandits were a threat. Nat Love, a well-known African-American cowboy wrote about a raiding experience on one drive saying, “Then the Indians and the white outlaws who infested the country gave us no end of trouble, as they lost no opportunity to cut out and run off the choicest part of a herd of long horns, or the best of a band of horses, causing the cowboys a ride of many a long mile over the dusty plains in pursuit, and many are the fierce engagements we had, when after a long chase of perhaps hundreds of miles over the ranges we overtook the thieves…there was no law respected in this wild country, except the law of might and the persuasive qualities of the 45 Colt Pistol.”5

For some cowboys, the danger started when the trail ended as “Cattle Towns” had a reputation for being rough-and-tumble places. In describing Dodge City, Kansas, Nat Love wrote that it was, “…a typical frontier city, with a great many saloons, dance halls, and gambling houses, and very little of anything else.”6 After months of boredom on the trail, cowboys would let loose with booze, gambling, women, and any other form of entertainment they could think of. This mixture of pent-up energy, unethical activities, and competing cattlemen inevitably led to troubles.

The boom in cattle drives continued into the mid-1880s with cattle operations pushing further into the Great Plains into places like North and South Dakota, and Montana. However, this boom became a bust for many operations due to economic, environmental, and technological reasons. Railroads continued to spread further across the west meaning cattle did not need to be moved on long drives any more since there were more depots to bring cattle. The invention of refrigerated train cars eventually meant that cattle did not need to be moved to markets. Meat packing plants sprang up near ranching areas and the meat itself would be shipped by rail.7

By the 1880s several million cattle roamed on the Great Plains. This led to overgrazing of the Plains. This issue came to a head in 1886 and 1887 as historically harsh winters followed by summer droughts in those years led to massive losses. In some areas near 90% of cattle herds were lost in what was called “The Big Die-Up.” Many cattlemen went out of business. Also, the greater prevalence of homesteading farmers in the Great Plains meant cattle could not be driven across open range. In the 1890s into the 1900s cattle operations shifted to raising higher-quality beef on a smaller number of acres.8

Even though the cattle drives lasted a short period of time they left a legacy that is still felt today. The disastrous way they ended led to the beginnings of producers considering resource management and sustainable practices. In fact, one of the cattlemen who went out of business in 1886-1887 was future president Theodore Roosevelt and the event was part of what led him to implement conservationist policies during his presidency. The biggest legacy of the cattle drives exists in popular culture. The cattle drives occurred in a time when the United States was shifting from an agrarian-based society to a more industrial and urban society.9 Because of this shift, the cowboys and ranch-life was looked on with nostalgia as “simpler times” and they became a popular subject for stories, songs, and eventually radios and television.

Anything from Rawhide to Yellowstone and many other Western movies and TV shows are derived from the cattle drives and cowboy lifestyle. Certain segments of Country music can trace their roots to the style in which cowboys would sing to pass the time while on the trail. Dude ranches and other similar tourist sites seek to give visitors a taste of what life was like for the cowboys. Sports teams like the Dallas Cowboys, Denver Broncos, University of Texas Longhorns and many others pay homage to their regions’ involvement in the cattle industry and/or cowboy lifestyle. You don’t need to look very hard to see the legacy of the cattle drives in American culture.

Chandler Hansen grew up and lives in Easton, NY. He is a graduate of Gordon College where he earned a bachelor’s degree in History. He serves as a writer and editor for Morning Ag Clips. Although he does not come from an agricultural background he continues to learn more about the industry every day in this job.

Outside of work, Chandler is involved in his church, is a musician playing the French horn in local music groups, and is a continual student of history (probably reading something about Abraham Lincoln or one of the other presidents).