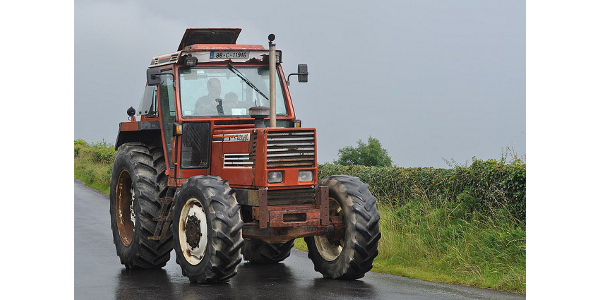 The scale of modern farming could not be accomplished without them and keep up with the food, fiber and fuel demand created by the 98 percent of the population not cultivating the soil. (Peter Mooney via Flickr)

JEFFERSON CITY — During the Missouri Farm Bureau Centennial in 2015, we asked several young Farm Bureau members what they thought the future of farming would look like. Close seconds to farming with Dad and Grandpa, tractors and technology were on the minds of the next generation.

Certainly in today’s agriculture world, tractors play a crucial role. The scale of modern farming could not be accomplished without them and keep up with the food, fiber and fuel demand created by the 98 percent of the population not cultivating the soil. Since their invention, tractors have enabled farmers to do infinitely more with less.

In 1888, steam-powered tractors made their debut on American farms, but in 1892, an Iowan named John Froelich built the first gas-powered tractor. These early tractors could do the work of several horses and men. Through the years, John Deere tractors have garnered mass appeal, but other manufacturers keep the market competitive: Ford, Massey Ferguson, Case IH, Kubota, Mahindra and New Holland, to name a few. Some farmers’ choices boil down to whether they’re in the green camp (Deere) or the red camp (Case IH), a family tradition of always having bought a trusted brand.

Modern tractors have many benefits the older ones couldn’t begin to address. App management, crop sensors, camera monitoring and GPS communications are a few of the features that give tractors of today a broader range of farming applications, power and durability, ease of operation and greater versatility.

While the future might include tractors that are driverless, GPS-guided versions of their humble beginnings, the MFB Foundation for Agriculture will be highlighting their predecessors on July 15. The 4th annual Keep Missouri Farming Tractor Cruise will leave Mound City for a 32-mile cruise along the rural highways in Holt County in northwest Missouri. You can still get a berth if you’ve got a tractor that is a model year 1985 or older. You are also welcome to line up along the route and enjoy the show.

Drivers will stop for lunch in Oregon, Mo., at the Methodist Church, where you can take a look at the vintage tractors up close. Enjoy a bite to eat with them while appreciating this iconic tool that, in no small part, makes your lunch possible.

Stop Sale, Use or Removal Order

Salute to Our Heroes