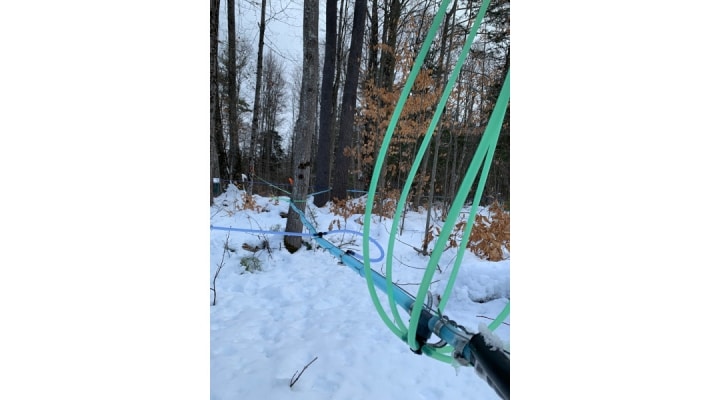 While Maple Weekends (the last two weekends in March) statewide have been canceled due to Covid-19, many producers still plan to welcome anyone that wishes to make the trip out to their operations. (Courtesy Photo)

MELROSE, N.Y. — “We started in 2019 with a few taps in the two maples tree in our front yard, and it grew from there,” said Janet Valyou, who runs Valyou Maple Farm on Roe Road in Melrose with help from her husband, Dave, and son, Zachary. “They’re the muscle when I need it for hauling in buckets and firewood, but all of the work with bottling, running the evaporator, filtering is all me.”

In 2020, Janet invested in a larger evaporator and tapped more trees on their property, as well as at the nearby firehouse where Dave is the Fire Chief. “We have around 130 taps,” said Janet. “My daughter, Jessica, recently bought a new home, and she found maples at her property as well and brings the sap to us for processing.”

Janet enjoys involving her family in the business. “I have two daughters, two sons, and a granddaughter,” said Janet. “It’s just fun to make. My favorite part is when it’s not quite syrup yet. You take it off the evaporator, and let it cool a bit so it doesn’t burn your tongue. You just get to enjoy that nice maple flavor. My granddaughter Joann’s favorite thing is to check the buckets for sapsicles.”

While Maple Weekends (the last two weekends in March) statewide have been canceled due to Covid-19, many producers still plan to welcome anyone that wishes to make the trip out to their operations. “We haven’t participated before,” said Janet. “We went out and saw a few other sugarhouses in 2019, but last year everything was canceled. If the weather holds out, we’ll have the evaporator running, and we’re happy if people want to stop by. We’ll be out there.”

Janet recommends potential visitors call ahead (518-813-3642) before making the trip as Mother Nature will dictate whether they are open.

For more information about what Valyou Maple Farm has to offer, find them on Facebook. If you can’t make it to Valyou Maple Farm but want to visit another maple producer during Spring into Maple Season, find the list at Upper Hudson Maple Producers.