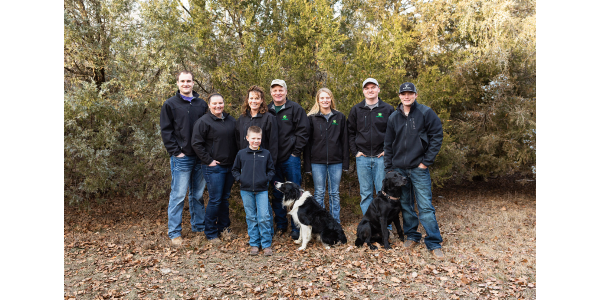 HURON, S.D. — As we reflect on the women who raised us this Mother’s Day, South Dakota Farmers Union would like to celebrate the many women who support the state’s No. 1 industry – farm and ranch moms!

DANNI BEER
“I think raising kids on the ranch provides them with a great work ethic. It teaches them so many life skills – you learn so much here. And, they get to grow up see­ing their mom and dad working together. A lot of kids don’t get to see that – for better or worse, our kids see everything.”
— Danni Beer, Keldron, rancher & mother of four

The only constant is change. And, for Keldron rancher, Danni Beer, that’s a good thing.

“Everything is constantly changing. If your operation isn’t changing with the times, or your family isn’t moving forward, something’s wrong,” explains Beer, 48. “I want to make sure the cattle industry stays progressive, not regressive or reactive. I want the same for my family.”

Beer, together with her husband, Mike, and oldest son, Bo, raise cattle and crops on the family’s ranch 20 miles southeast of Lemmon. Growing up on a ranch just across the North Dakota line, Beer always enjoyed ranch work. She knew she wanted to remain in the agriculture industry and pursued an agriculture education degree at South Dakota State University. She also knew she wanted to raise her family on a ranch.

“I think raising kids on the ranch provides them with a great work ethic. It teaches them so many life skills – you learn so much here. And, they get to grow up seeing their mom and dad working together. A lot of kids don’t get to see that – for better or worse, our kids see everything,” says Beer, of their four children Bobbi Froelich, 26; Bo,25; Bailie, 22, and Blaze, 9.

Working on the ranch fulltime, other than a few brief years here and there, Beer says she has enjoyed watching their children learn and grow.

“I have always enjoyed watching them learn new things. And, there are sometimes when the kids teach us more than we teach them. It happens nearly every day with technology,” Beer says. “There are times when I watch my daughter, Bailie, do things on the ranch, and she does things the way I would do them. It’s like having someone who thinks a lot like you do.”

Reflecting on her parenting skills, Beer says she learned a lot from her own mother, Gloria Maher. “She is the perfect mom. She put her kids first in everything. She supported my dad and us kids in everything we did.”

Beer worked to do the same. “Sometimes you just have to drop everything and get them to their activity. And, sometimes they have to learn you can’t do everything. You have to say, ‘no’ to some things,” she says.

In addition to ranch work and children, Beer also gives of her time to the cattle industry. She helped found the U.S. Cattlemen’s Association and served as its president 2014-2016. She remains active in the organization as a board member. “Getting involved in the agriculture industry off the farm or ranch is something you need to do to help direct the future,” she says.

Discussing the future, she says as a mom, she’s enjoyed every stage of her children’s lives. “When the kids were little, helping them with things and now that some are adults, interacting with them as adults.”

JANET KOLOUSEK
“I always thought it would be wonderful to raise the kids in the country because I felt it taught them about nature and responsibility.”
— Janet Kolousek, Wessington Springs, farm wife and mother of three

Even before she married a Wessington Springs crop and cattle farmer, Janet (Carter) Kolousek knew when she became a mother, she wanted to raise her children in the country.

“I always thought it would be wonderful to raise the kids in the country because I felt it taught them about nature and responsibility,” explains Kolousek, 67, who grew up on a diversified farm. “I have always enjoyed the wide open spaces and loved going out and hearing birdsong and seeing wildlife, being able to see the stars and moon at night. I just love the land. I love nature. I love creation. And, it’s easy to enjoy all that when you’re in the country.”

Together with her husband, Dick, she did get to raise their three children, Scott, Laura and Leah, in the country, on his family’s Wessington Springs diversified crop and livestock farm.

But, because the family needed health insurance, she used her education as a medical transcriptionist coder and worked fulltime off the farm at a local medical clinic, first in insurance, then as an administrative assistant and, eventually working her way up to serving as office manager for three clinics.

Reflecting on the busy years as a working mom, she doesn’t know exactly how she juggled it all. “Just like every other working mom, I just learned how to get everything done and keep up with the kids’ activities and job responsibilities.”

When the kids were too young to spend time on the farm without close supervision, Dick’s mom, Ione, watched them. “This helped immensely. I knew they were with family. I knew my husband was within a few miles if anything happened and he was needed. The kids got to help grandma with her garden, and with the chicken chores. They learned all kinds of things from Grandma and Grandpa, and that was great for them and for us.”

Semi-retired, today, Kolousek gets to spend a lot of time with grandchildren. Scott farms with Dick, and he and his wife, Amber, live just a half mile away.

“One of the best things about a family farming operation is that the people you work with have the same goals and dreams, and we all love and trust each other,” Kolousek says.

Two of her grandchildren do live in Rapid City, but when they visit, she makes time for all the cousins to play and work together. “I read somewhere that grandma’s is where cousins become friends.

“I think it is a real blessing. I know there are a lot of grandparents whose kids live so far away that they don’t get that quality time together with the grandkids to form that bond between grandparents and grandchildren,” she says.

Reflecting on her parenting years, she relied upon her parents’ example, advice from friends and her faith. “Prayer and faith were the main thing – and talking with other moms, asking how they dealt with this or that.”

Growing up, Kolousek’s mom made sure she and her siblings never missed church. As an eighth-grader, she began to play piano for her church, a tradition she continues today, playing piano for St. Joseph’s Catholic Church.

“Mom really taught us that you need to give of your time and talents – use the gifts God has given you for His glory.”