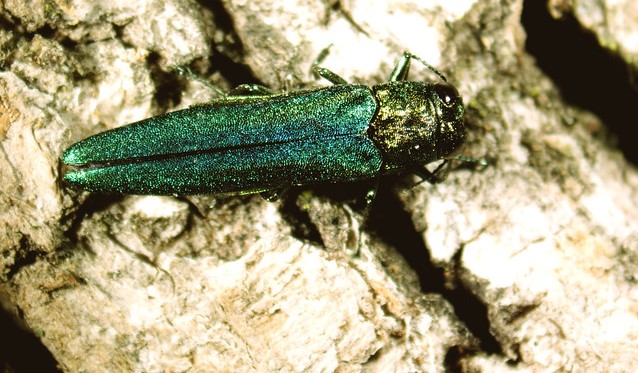 Adult emerald ash borers are tiny, about the width of a penny, and infest trees from the top down, making detection particularly difficult. (Delaware Agriculture, Flickr/Creative Commons)

AUGUSTA — In an ongoing effort to increase awareness of the threat of emerald ash borer (EAB), the Maine Department of Agriculture, Conservation and Forestry is tagging ash trees in communities statewide that are at risk of invasion. The tagging effort coincides with Maine Arbor Week and National Emerald Ash Borer Awareness Week, May 19-25, 2019.

“Over 100 million ash trees have died across the country from the emerald ash borer since its original detection in Michigan in 2002. In 2018, EAB was discovered in Maine for the first time.  Although the infestations are confined to northern Aroostook County and southwestern York County, every community with ash trees is at risk. “Awareness and early detection provide the best opportunity for management in our communities and in the forest,” explained Colleen Teerling, Entomologist with DACF.

Adult emerald ash borers are tiny, about the width of a penny, and infest trees from the top down, making detection particularly difficult. In most areas where it is found, trees are already dead or dying, meaning the insect was there for years before detection. Surveillance efforts in the state include hanging purple prism traps in ash trees, girdling ash trees to act as detection trap trees, bio-surveillance with a native stingless, ground-nesting wasp, and public education and awareness.

During Maine Arbor Week and Emerald Ash Borer Awareness Week, Maine cities and towns are tagging ash trees for public awareness. These tags identify which trees in the landscape are ash, helping citizens understand the visual impact this insect will have on our streets and in our forests, if left unchecked. The tags also have a calculated value based on size that will give the public an understanding of the environmental and economic values trees provide on an annual basis.

Because ash trees grow quickly and are very tolerant of poor growing conditions, they are a popular choice for a street tree. Some Maine towns are planted with as much as 30% ash. Its ironic, given that many main streets were lined not that long ago with majestic American elm trees, another tree lost to an invasive forest pest. Many of the ash trees on our streets and parks were planted in the wake of Dutch elm disease, when we lost our elms 30-40 years ago.

The Maine Forest Service is also welcoming landowners with significant ash resource to participate in the trap tree network. More information can be found here; http://www.maine.gov/dacf/mfs/forest_health/invasive_threats/eab_trap_trees.htm.

To learn more about the emerald ash borer, including the quarantines that affect trade, go to http://www.maine.gov/eab.

For more information about the Maine Department of Agriculture, Conservation and Forestry, go to: www.maine.gov/dacf.