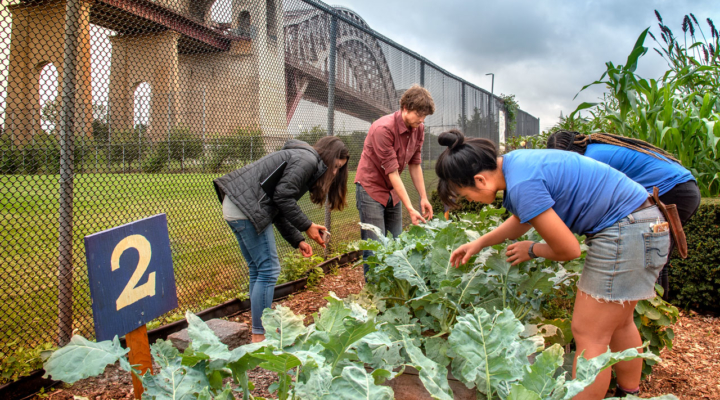 ITHACA, N.Y. — From the rooftops of New York City to the sidewalks of inner-city Buffalo, urban farms are sprouting vegetables, fueling businesses and helping grow vibrant communities across the Empire State. Working these small plots are farmers young and old, from backgrounds as diverse as their agricultural needs and challenges.

Specialists from Cornell Cooperative Extension (CCE) are helping urban farmers make the most of confined spaces and unique growing conditions.

“I love working in agriculture in this city because there’s such variety,” Anderson said. “One day we’re visiting an outdoor aquaponics setup where there’s goldfish on one side and okra growing in floating rafts on the other. Then the next day we’re visiting a rooftop farm with a view over the Hudson River, and the next we’re in the Rockaways, on a farm half a block from the beach.”

“We’ve found that most of these producers do not have a previously written food safety plan, which is critical for bringing product to market,” Gonzalez said. “Through our consults with local larger-scale urban farms on food safety certifications options, we’ve been able to open more doors for selling produce directly to distributors and retail outlets – including the new Wegmans supermarket slated to open in Brooklyn.”

Featuring raised beds and a high-tunnel hoop house, the tiny organic farm sits on a couple of inner-city blocks in a neighborhood with limited access to fresh fruits and vegetables.

There, newly resettled refugees from the Democratic Republic of the Congo, Nepal, Bhutan and Myanmar grow produce that is distributed locally through a CSA, at farmers markets and in nearby restaurants. The vegetables are also shared with families in the Brewster Street neighborhood.

“A lot of our participants have agriculture experience in their home countries, but it’s a little different here in regard to climate and some of the technical aspects,” said Jenna Walczak, the program’s farm manager. “Jud brings Cornell expertise that helps us decide when, where and what to plant, and we turn to him to troubleshoot plant disease issues.”

Educators from CCE’s Erie County association join Reid in teaching participants basic agribusiness skills – such as managing a budget in terms of the inputs necessary to grow the crop, how should it be priced, and how much yield is necessary to be profitable.

“CCE’s role in New York state urban agriculture allows the organization to achieve its mission by putting research-based knowledge in the hands of people – in this case [people] who want to grow their own food to eat, or grow food as a business – and do so in a way that is environmentally and economically sound,” Reid said. “And we often find that urban agriculture gives people an opportunity to develop a sense of belonging and contribution to the greater community.”