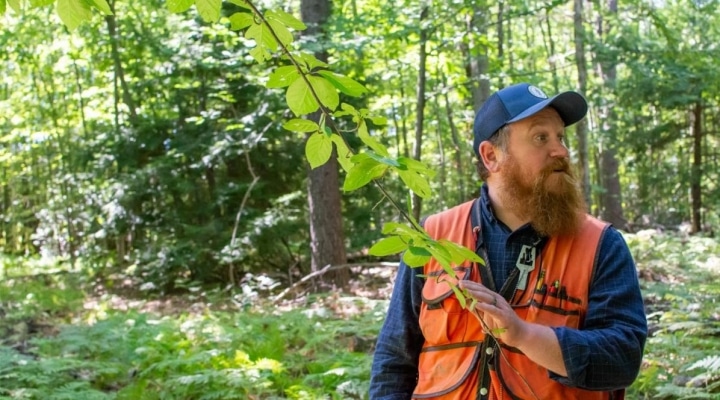 For the last 13 years, Steve Roberge has served as Cheshire County Forester before transitioning in March 2020 to his current role as the University of New Hampshire Cooperative Extension State Forestry Specialist. (Courtesy Photo)

WALPOLE, N.H. — Each year, the Cheshire County Conservation District honors an individual or organization with the “Educator of the Year” award. This is done to celebrate the efforts the recipient has undertaken to steward a conservation ethic and awareness through their personal and professional work, in whatever form of education that takes. This year we are happy to announce Steve Roberge as our 2020 Educator of the Year.

Steve Roberge has dedicated his career to supporting forestry conservation in the granite state. For the last 13 years, Steve has served as Cheshire County Forester before transitioning in March 2020 to his current role as the University of New Hampshire Cooperative Extension State Forestry Specialist. At its core, Steve’s work is focused on the education of landowners and the training of foresters.

Steve grew up in Berlin, NH admiring the White Mountains from his kitchen window. Steve’s parents were avid hikers and campers who instilled an outdoor ethic within him that stuck with Steve throughout his entire life. Originally, Steve attended college at UNH with the intention of becoming a game warden, but soon switched his wildlife major to a forestry major after just his second semester. After graduating in 2003 with his forestry degree, Steve attended the Yale School of Forestry from 2003-2005.

Throughout his schooling, Steve spent his summers researching and measuring course woody material, logging what his professor called “world record hours” in woody material data collection. After his time at the Yale School of Forestry, and before becoming the UNH Cheshire County Forester, Steve worked for the Connecticut Wildlife Division and did some non-profit work on a conserved land CSA in Weston, MA where he mainly ran the sugary and trails operations of that property.

Steve’s favorite part about working in the field of forestry is that “there’s so much to learn and see”, there’s a variety of place and work, and he frequently gets to see something different every day. As Steve likes to say, “if you’re out there and you’re not learning anything, you’re not looking.”

UNH foresters are also considered “Extension Educators,’ making Steve an ideal candidate for this award. County Foresters are licensed foresters who don’t write management plans or sell timber, but rather provide service and education to landowners. Steve’s goal is always to build awareness and fully inform landowners of the wide range of management options available to them, always leaving the final decision up to the landowner. As Steve says, his work is about meeting people where they are at, so he never comes to a landowner’s property with an agenda.

Steve’s goal is simply to connect people to their land to inspire stewardship. This, to Steve, is the most rewarding part of his work – getting folks out onto their properties in a way that is comfortable for them, helping them discover the value held within their land, and hopefully, instilling a desire within the landowner to become a better steward of their land.

The most difficult part of Steve’s work is simply getting folks to know that he, and other County Foresters across the state, are a free and widely available resource. In NH, there is one forester position for every County and in Cheshire County, that equates to one forester for approximately 5,000 landowners with 10+ acres of forest. When utilized, foresters are a valuable resource for landowners providing site visits, education, follow up, and guidance all along the way with the end goal of building a foundational understanding within the landowner, and again, to inspire future commitment to stewardship.

In Steve’s newest role as State Forestry Specialist, he is not out in the woodlots as much as he once was, but this has provided him the opportunities to think more creatively about forestry work in NH. Through this position, Steve gets to explore new ways to support the County Foresters he now oversees, he is developing new projects, writing grants, and working directly with partners to promote forestry conservation throughout the state.

We at the CCCD and NRCS are also immensely grateful for Steve’s partnership over the years. County Foresters have a formal agreement to provide forestry expertise to NRCS staff by assessing projects and properties, as well as training NRCS staff on forestry issues. Steve has also maintained long stability working alongside the CCCD. Over the years, we’ve partnered numerous times on educational opportunities for the public and supported each other’s efforts through shared promotion and outreach, which has allowed us to reach a wider audience and build greater awareness and support of forestry programs across the County.

As if Steve hasn’t been busy enough, he also currently chairs the NH Forester Licensing Board, is a member of the Northeastern Forest Resources Extension Council and the Hubbard Brook Research Foundation Advisory Council, and is executive committee chair of the Society of American Foresters, Granite State Division.

Here in the granite state, as our landscape becomes increasingly more fragmented, we face the potential loss of valuable ecosystem services and the forestland itself. This makes the educational work of County Foresters like Steve invaluable to the future of conservation in NH. It is with great pleasure that the CCCD presents Steve Roberge with the 2020 Educator of the Year Award. Congratulation Steve!

Please join the Conservation District in honoring Steve Roberge for his efforts to steward a conservation ethic and awareness among residents of Cheshire County, at the CCCD’s 75th Virtual Annual Meeting on Tuesday, October 27th at 7pm. While this is a free virtual event, registration is required to receive information on how to participate online. Please register at https://cccd75th.eventbrite.com

Maine farmers eligible for federal assistance due to drought