Home » CCCD honors Samuel Jaffe as 2021 Educator of the Year 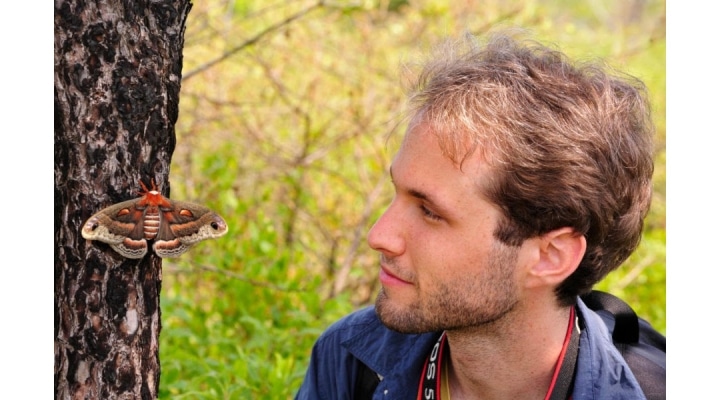 Sam Jaffe has dedicated his career to supporting native caterpillar education in the granite state and beyond. (Courtesy Photo)

WALPOLE, N.H. — Each year, the Cheshire County Conservation District honors an individual or organization with the “Educator of the Year” award. This is done to celebrate the efforts the recipient has undertaken to steward a conservation ethic and awareness through their personal and professional work, in any form of education that takes. This year we are happy to announce Samuel Jaffe as our 2021 Educator of the Year.

Sam grew up in Newton, MA. His immediate surroundings were his mother’s garden and a local suburban park. It is there that his love of the natural world flourished. As a child, Sam’s parents would find caterpillars crawling around the living room that he had brought in from outside. His parents encouraged his love of caterpillars. One evening, his mother brought in parsley from the garden, and found a black swallowtail caterpillar on it. This would become Sam’s first experience raising caterpillars.

By 2009, Sam was presenting his photography at exhibits, while also surprising crowds with live caterpillars. Crowds met the caterpillars with excitement and enthusiasm to learn more. The response of those who saw the images and caterpillars, made Sam realize that he could share his passion with others in a new and accessible way, and in a way that changed the way those perceived the natural world around them.

Sam continued presenting exhibits, and by 2011, was working with friends and peers to create interactive and educational experiences. In 2013, Sam was attending Antioch University New England, and launched a Kickstarter campaign to fund full summer educational caterpillar programs with two of his AUNE peers. This was when “The Caterpillar Lab” was born.

Sam and his peers worked late nights in a single apartment in downtown Keene to bring their vision and passion into fruition. Their hard work paid off, and with a successful Kickstarter campaign, they began presenting across New England that summer and eventually filmed with the BBC for three weeks of caterpillar programming. The Caterpillar Lab became a physical space in 2014 in Keene and would later move to its current home in Marlborough, NH, as a registered Non-profit corporation.

As The Caterpillar Lab has grown, so has its programming. It now boasts a significant online presence, free visiting hours, and the addition of microscopes to showcase the life stages of a caterpillar that would otherwise go unseen by the general public.

In a short period of time, The Caterpillar Lab has become a cornerstone of the community and beyond, working with local schools, interns, organizations, universities, and scientists. The Caterpillar Lab’s work ranges from photography, natural history, art, entomology, and even modern dance. The Lab’s work and programs are constantly changing and growing. Sam notes that this successful metamorphosis could not be possible without the wonderful staff at the Caterpillar Lab, who bring their own unique point of view to this work and have kept the excitement going throughout the years.

The Caterpillar Lab recently worked with a local student who grew up across the road from the lab on her senior undergraduate thesis. Following her graduation, she entered a PhD program in Entomology. Sam notes that this is what The Caterpillar Lab is all about: creating an accessible, no-barrier experience to encourage others to do what they love. This aspect of The Caterpillar Lab’s work is the most rewarding to Sam.

The most challenging part of Sam’s work is finding support to do the kinds of programs that can reach the broadest audiences. One of The Caterpillar Lab’s larger goals is to engage the urban and suburban populations of New England. With the ongoing Covid-19 pandemic, accessing more populated venues poses a challenge, and requires more time and energy. Pre-pandemic, The Caterpillar Lab engaged 30,000-40,000 individuals a year through its programs. The Caterpillar Lab hopes to eventually gain enough support to host free street-level programs and bring caterpillars to a diverse audience.

Sam is currently working on a book to showcase the full life stages of caterpillars and create a true guide to life histories of the species. The book will include Sam’s photographs, art, as well as essays.

When asked his favorite species of caterpillar, Sam shared three: the monkey slug caterpillar, the abbott’s sphinx, and the giant cecropia moth!

The Cheshire County Conservation District is immensely grateful for Sam’s partnership over the years, and for his enthusiasm in sharing his passion with all of us. As climate change and commercial development impacts the habitat of native caterpillars in the Granite State, The Caterpillar Lab’s work is more valuable than ever. It is with great pleasure that CCCD presents Sam Jaffe with the 2021 Educator of the Year Award. Congratulations, Sam!

The Cheshire County Conservation District celebrated Sam and our 2021 awardees at our 76th virtual annual meeting on October 26th, 2021. A recording is available here: https://youtu.be/Jtaw9RMEToI

Read more about our awardees and CCCD’s programs and accomplishments in our 2021 Annual Report: https://www.cheshireconservation.org/annual-report