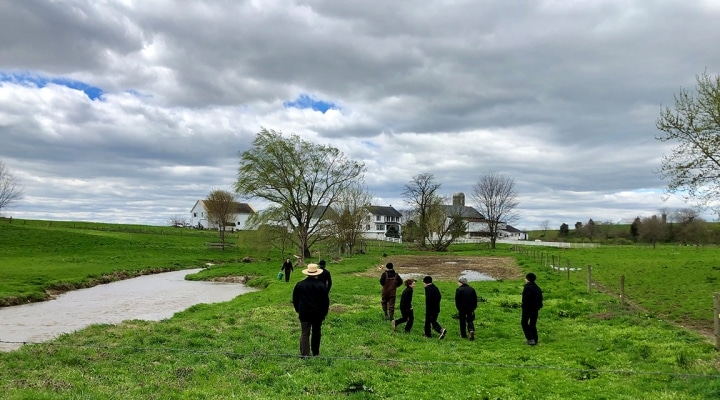 The 2025 deadline to have programs and practices in place to restore the Chesapeake Bay is just around the corner. The Chesapeake Bay Foundation (CBF) thanks U.S. Sens. Ben Cardin (D-Md.) and Robert Casey (D-Pa.) for their efforts to help achieve those requirements by seeking funds in next year’s budget for projects to tackle the biggest challenge to restoring the Bay—reducing polluted runoff from Pennsylvania farms. (Photo by Brian Gish/CBF Staff)

WASHINGTON — The 2025 deadline to have programs and practices in place to restore the Chesapeake Bay is just around the corner. The Chesapeake Bay Foundation (CBF) thanks U.S. Sens. Ben Cardin (D-Md.) and Robert Casey (D-Pa.) for their efforts to help achieve those requirements by seeking funds in next year’s budget for projects to tackle the biggest challenge to restoring the Bay—reducing polluted runoff from Pennsylvania farms.

For the first time in a decade, senators can request funds for specific community projects in annual appropriations bills. Sens. Cardin and Casey used this opportunity to seek more than $8 million in the fiscal year 2022 Agriculture spending bill to restore the Pequea Creek and Halfmoon Creek Watersheds in central Pennsylvania.

Lancaster County delivers more pollution to the Chesapeake Bay than any other county in the Commonwealth. Sens. Cardin and Casey requested a total of $7 million for restoration work in the county’s Pequea Creek Watershed.

“The senators’ request will provide a much-welcome jumpstart toward designing and implementing priority practices, in priority places, in collaboration with partners and landowners of the watershed,” said Harry Campbell, Science Policy and Advocacy Director in CBF’s Pennsylvania office.

“Led by CBF’s Watershed Coordinator Brian Gish in Pennsylvania and employing first-hand local knowledge from an array of partners, along with emerging high-resolution modeling techniques, CBF and local partners developed a plan that provides a detailed framework for local decision-makers, landowners, and resource agencies to restore and protect the watershed in the heart of Lancaster County,” Campbell added.

The funds Sens. Cardin and Casey requested would support practices that keep soils and nutrients on the land instead of in the water, such as cover crops, no-till agriculture, nutrient management, animal waste management, riparian buffers, streambank fencing, streambank stabilization, and reducing legacy sediment in the Pequea Creek Watershed.

In 2010, EPA and the Bay states set the limit for how much pollution the Bay can tolerate and remain healthy. Yet CBF’s latest State of the Bay report shows the region is still far short of the requirements, with pollution reductions from agriculture comprising more than 80 percent of the work left.

Maryland and Virginia still have work to do, although both are largely on track to meet the 2025 deadline. Pennsylvania lags far behind, particularly in reducing polluted runoff from farms. All three states require significantly more investment from the federal government. But Pennsylvania and the nearly 34,000 family farmers in the state’s Bay watershed who are willing to devote their time, land, and effort to this effort need it most—and time is running out.

While the annual appropriations process cannot provide the billions needed to restore this national treasure, CBF applauds the down payment Sens. Cardin and Casey requested as a promising start.

“CBF thanks Sens. Cardin and Casey for recognizing that the U.S. Department of Agriculture needs to devote robust funding to helping Pennsylvania farmers reduce polluted runoff from their fields. Funding local conservation projects in the Commonwealth is the most cost-effective way to save the Bay while we still can,” said Federal Executive Director Denise Stranko.

“CBF commends these stalwart Bay champions for their efforts to achieve our shared goal of restoring the health of local rivers and streams, and the Chesapeake Bay. We cannot allow our decades-long push to revitalize this ailing national treasure fail,” Stranko said.

“We look forward to working with Sens. Cardin and Casey, and our other supporters on Capitol Hill, to ensure USDA is appropriated the money to fund these worthy restoration projects in next year’s budget,” she added.