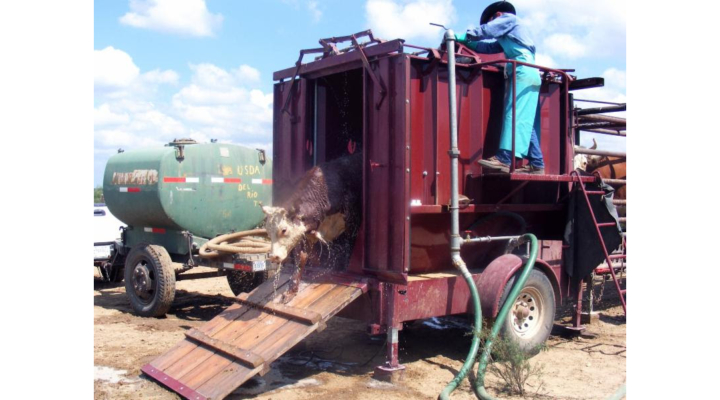 AUSTIN — Texas Animal Health Commission (TAHC) and the United States Department of Agriculture-Animal and Plant Health Inspection Service (USDA-APHIS) continue the fight to protect the Texas and U.S. cattle industry from cattle fever ticks, which may carry bovine babesiosis, a deadly disease once found in Texas and 13 Southern states.

Cow exiting a spray box after being treated

Through extensive research, effective methods for fighting cattle fever ticks have been discovered, including personal inspection called “scratching,” injectable Doramectin, and Environmental Protection Agency (EPA)-approved Coumaphos insecticide applied to cattle by dipping or spraying. TAHC and USDA-APHIS staff is highly trained to use the dipping and spraying equipment.

“Portable spray boxes have been utilized for decades and have proven very effective in our containment and eradication efforts,” said Dr. Andy Schwartz, Texas State Veterinarian and TAHC Executive Director. “It is important to note that over the years of state and federal use, there has been no indication the application of Coumaphos in spray boxes has led to cattle deaths.”

“Because spray boxes are portable units, we can take the fight to where the ticks are,” said Dr. Schwartz. “Since September 1, 2016, TAHC has traced fever tick exposed cattle to over 919 individual premises in 82 counties across the state. TAHC was able to efficiently and safely treat the cattle because of the spray box features.”

“TAHC is committed to our mission of protecting the health and marketability of all Texas livestock,” said Schwartz.

In a Texas A&M University study on the economic impact of an expanded fever tick range, the cost of a relatively small fever tick outbreak outside the quarantine zone in Texas would be $123 million in the first year.

If the outbreak reached its historic range it would result in a minimum cost of $1.2 billon in the first year. For the complete study, please visit https://www.afpc.tamu.edu/research/publications/548/Tick-Study-RR-10-02.pdf.

The fever tick and the disease it carries has been a threat to American agriculture for generations. Today, portions of nine South Texas counties have established fever tick quarantines. The counties include Cameron, Live Oak, Hidalgo, Kinney, Maverick, Starr, Webb, Willacy and Zapata.

Cattle Fever Ticks, known scientifically as Rhipicephalus annulatusand R. microplus, are a significant threat to the United States cattle industry. These ticks are capable of carrying microscopic parasites that can cause a disease commonly known as cattle fever. Cattle fever attacks and destroys red blood cells causing acute anemia, high fever, and enlargement of the spleen and liver, ultimately resulting in death for up to 90 percent of susceptible naïve cattle.

Within quarantine areas, all livestock (cattle and equine) and live or hunted wildlife (such as nilgai antelope and white-tailed deer) capable of hosting fever ticks are subject to movement restrictions, inspections and treatment.