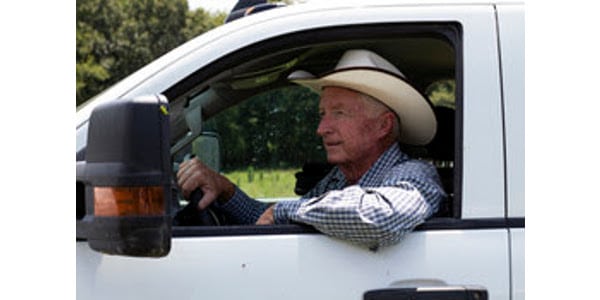 The Simpson family raises cattle on more than 4,000 acres of rolling grasslands in southwest Missouri's Ozark region. As a fifth generation farmer in Salem, Mo., Bobby Simpson is no stranger to working with his family. (Courtesy of Missouri Department of Agriculture)

JEFFERSON CITY — The Simpson family raises cattle on more than 4,000 acres of rolling grasslands in southwest Missouri’s Ozark region. As a fifth generation farmer in Salem, Mo., Bobby Simpson is no stranger to working with his family. With his son as a full-time partner in their family’s cow-calf operation, Simpson embraces the growing and ever-changing business that is farming.

Simpson’s grandfather came to the United States from England to set up a ranch in Texas. From that generation on, cattle was in their blood. Over the next few generations, the family moved from Texas to New Mexico, and finally Simpson’s father moved the family to the Missouri Ozarks.

Moving the family to Missouri wasn’t easy for Simpson’s father. In 1952, Simpson’s parents relocated to the Ozarks with the dream of moving their cattle operation to Missouri.

“The Ozarks is a great place to raise cattle,” said Simpson. “We’re not suited for crop land, and we have a lot of forage here, so it is just a natural fit for cattle production.”

Simpson, an active member in and current past president of the Missouri Cattlemen’s Association, is proud of his fellow farmers and the impact they have on the cattle industry.

“I’m most proud that we’re one of the leading states in the nation in cattle production,” said Simpson. “We raise one of the best products in the world and I’m just proud to be here and doing what we do. We’re delivering a safe and nutritious product to the consumer.”

Working with his son on their family farm is a very rewarding experience for Simpson. Seeing his grandchildren start to become very interested in being involved in farming and raising cattle, Simpson knows his farm’s future is in good hands.

“When we sit on a tractor all afternoon raking hay, it’s amazing all the subjects we can cover and the knowledge I can pass along to him not only about our family history, but what we’re actually doing today,” said Simpson.

Although Simpson may be looking towards the next generations to get more hands-on in the family’s cattle business, he has no intention of slowing down.

“I knew from my earliest memories that I wanted to farm and raise cattle for life,” said Simpson. “We have a multi-generational family in the cattle business. I can see the next two generations coming up behind me, so it is farming for life – more than my life.”