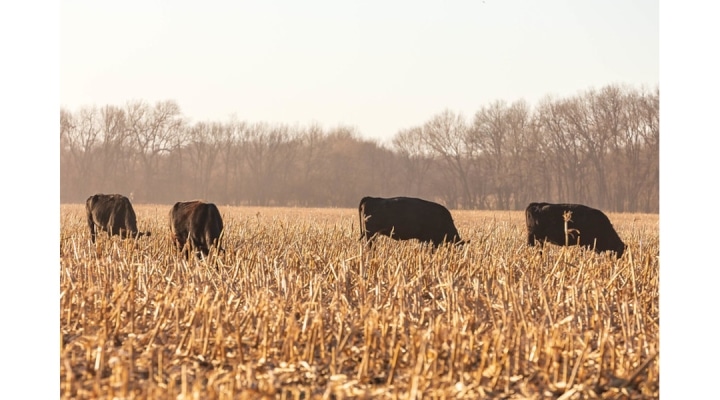 Feeding old hay, limiting the time cattle have access to hay and moving cattle to fields that hold crop residues are three strategies that can help provide nutrition to the herd when grazing pastures are in a drought. (Photo: K-State Research and Extension, Flickr/Creative Commons)

MANHATTAN, Kan. — With any recipe, it takes the right blend of ingredients to make the perfect batch, but if something is missing, the nutritional value changes.

In much the same way, grazing pastures that don’t have adequate rain are not able to meet the nutritional needs of the cow herd without supplementation, say the experts at the Kansas State University Beef Cattle Institute.

“Older hay does not hold the same nutritional value as hay that has been cut within the year because microbes and weather break down the carbohydrates, protein, and vitamins in the hay the longer it sits out,” he said.

White added: “There is a value in feeding older hay, but the quality has declined and so producers need to account for that in the overall ration.”

To be sure of the nutrient value, they said testing the hay was important.

Another management strategy is to limit the time the cows have access to the hay to prevent waste, said Larson.

“By giving cows access to the hay 6-8 hours a day and then moving them out of the lot, they will get the same nutrition as they would have with free choice access but will waste less of the hay because they aren’t tossing it around as much,” Larson said.

The third strategy the experts discussed was grazing crop residues.

“Crop residues can be a great feed source, but producers need to remember that they have the greatest nutritional value on the first day the cattle are turned out and the quality decreases the more time that passes,” Larson said. “This is because the cows will eat the leaves and ears on the ground first and then the stalks, which have less nutrient value.”

Larson also said producers will need to make sure the cattle grazing corn stalks and milo residue have adequate fencing and access to water.

Along with that, Pendell said that producers need to account for labor costs in these strategies.

“With limit feeding and turning cattle out on crop residues, there are additional labor costs, and in some cases, fencing costs that need to be budgeted for when deciding on if this a good strategy for the operation,” Pendell said.

To hear the full discussion, listen to the Cattle Chat podcast online.