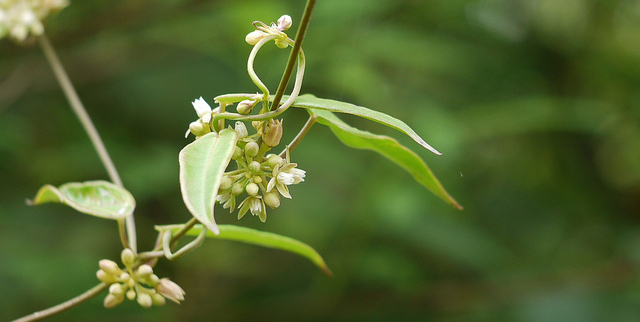 Swallow-wort has so many vile tricks up its proverbial sleeve, I think even Emperor Palpatine from the Star Wars saga would be jealous. It can grow in nearly all soil types, has a robust, Medusa-like root system which poisons competing vegetation, and it is endowed with super-powers where seed production is concerned. (Dinesh Valke, Flickr/Creative Commons)

CANTON, N.Y. — This summer, the United States Department of Agriculture (USDA) has come through with a new hope for the forces of good. Its Animal and Plant Health Inspection Service (APHIS) has opened a public comment period, ending on August 14, 2017, relating to the release of a non-native insect to control swallow-wort.

Sometimes called “dog-strangling vine,” this invasive plant from Eurasia doesn’t harm pets, but it does live up to its name as a strangler. There are two species of the perennial vine, and they are both adept at choking out wildflowers, forest seedlings, Christmas tree plantations, hay fields and other habitats. In the Eastern Lake Ontario region, it has proved capable of blanketing large tracts, hundreds of acres in some cases, to create permanent monocultures of tangled, toxic foliage.

While there are subtle differences between pale and black swallow-wort in terms of appearance, they behave the same, and there are reasons (for example, indulging my laziness and sparing you some tedium) to lump them together in an article, if not a hay field. Heck, botanists are still fist-fighting about whether swallow-worts are in the genus Cynanchum or Vincetoxicum, so let’s consider them (plants, not botanists) identical.

Swallow-wort has so many vile tricks up its proverbial sleeve, I think even Emperor Palpatine from the Star Wars saga would be jealous. It can grow in nearly all soil types, has a robust, Medusa-like root system which poisons competing vegetation, and it is endowed with super-powers where seed production is concerned. Related to the common milkweed, swallow-wort attracts monarch butterflies, which lay eggs on it. The problem there is that the caterpillars die from eating the toxic leaves. In fact, the vine is so noxious that nothing, not even insects, feed on it. Amazingly, it can bounce back from powerful herbicides like glyphosate (the active ingredient in products such as Roundup), apparently stronger than ever. No wonder biologists and agronomists have been losing sleep over it.

So it’s with much relief that the USDA posted its notice about the public-comment period on July 13th. While dog-strangling vine has withstood mowers, rototillers, flame throwers (true) and potent agrochemicals, it’s no match for this brute, which was identified by researchers from the University of Rhode Island and others in 2013. At roughly a tenth of the weight of a paper clip and a fraction of an inch long, our hero is a caterpillar, Hypena opulenta, the larva of a Ukrainian moth.

In its native range, swallow-wort is just another well-behaved plant because the tiny green Hypena opulenta caterpillar, along with many other insects, keep it in check. In fact, Carleton University biologist Naomi Cappuccino, a Canadian researcher who went to Ukraine with URI scientists to look for biological controls, said they had a hard time locating any swallow-wort; it was that scarce.

Finding biological controls for an exotic invasive plant is no easy task, and requires traveling to the plant’s home environment(s) to make field observations in all kinds of conditions. But once an insect, pathogen or vertebrate is identified, the real work begins. Many years of quarantine with carefully controlled trials are required to make sure a potential hero won’t end up going over to the Dark Side when swallow-wort gets scarce, eating all our corn and soybeans or something like that. In the past, “miracle cure” organisms have done more harm than good (witness the cane toad in Australia and the mongoose in Hawaii), so a great deal of care is taken to approve biocontrols today.

Not to take the shine off the USDA’s work, but our Canadian friends approved Hypena opulenta for release way back in 2013, and it is already putting a dent in the dog-strangler population in some places. The hope is that we will eventually have a success story like we had with purple loosestrife, which was poised to wreak great harm to freshwater wetland ecosystems before biocontrols were introduced. Even if Hypena opulenta performs admirably, it may be a while before we notice much difference. To paraphrase Princess Leia, “Help us, Hypena opulenta; you’re our only hope.” Thus far, at least.

For more information on swallow-wort and other invasive species, visit sleloinvasives.org, or call your local Cornell Cooperative Extension office. To see the USDA proposal and its comment page, visit https://www.regulations.gov/docket?D=APHIS-2017-0053