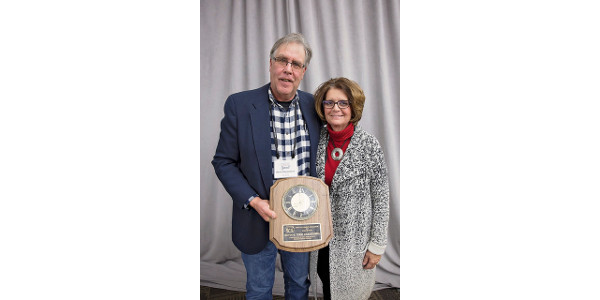 AMES, Iowa — Kevin and Terri Carstensen celebrated their 40th wedding anniversary in November, and were inducted in to the Iowa Cattlemen’s Association Hall of Fame in December.

The couple, who raised cattle in Sac County, have served in a variety of leadership roles throughout the years, even earning themselves the title of “First Couple” when he was president of the Iowa Cattlemen’s Association and she was chair of the Iowa Beef Industry Council at the same time.

As a board member, and later, president, of the Iowa Cattlemen’s Association (ICA), Kevin has long worked to improve the regulations and rules that impact cattle producers in Iowa. “ICA is our voice, so to speak, because they can be there 24-7 during the legislative process. I think that’s huge,” he says. “A lot of people say, ‘They can’t do us any good.’ Well, I don’t know where we’d be if we didn’t have a voice and lobbying.”

Kevin’s dedication to the ICA began in the 1980s when Maynard Jayne, ICA lobbyist, challenged him to become involved. The Iowa Cattlemen’s Association has nearly 10,000 members across the state of Iowa, and works to grow the Iowa beef business through leadership and education for producers. ICA also represents cattle producers at the state and national level on issues that impact cattlemen. According to Kevin, Jayne helped him realize the importance of the political process and the role that ICA plays in it. Since that time, he’s also realized how the work of politicians in Des Moines or Washington, DC, impacts cattle producers in Iowa. “There’s probably a hundred different ways policy has affected what I do on my farm,” he says, “but one of the biggest happened about 15 years ago, when EPA’s Clean Water Act came into play.”

Throughout his tenure, Kevin has served as ICA membership vice chair and chair, ICA Political Action Committee chair, and district director. He has also been involved with ICA’s Finance Committee, and currently serves as the treasurer for the Iowa Cattlemen’s Foundation. Kevin served as the ICA Northwest Iowa Regional Vice President for four years and president of the association for two years. He was also on two CEO selection committees.

Kevin’s impact on the cattle industry was not limited to Iowa. He served as chair of the Private Lands and Environmental Management Committee for the National Cattlemen’s Beef Association (NCBA) and the feedlot representative for the Environmental Stewardship Awards Program. He has testified before the Environmental Protection Agency (EPA) on behalf of cattlemen and was involved in the dust rules review of the Clean Air Act. The couple has also led EPA representatives on a tour of their farm.

Work with environmental committees and policies impacted the way the Carstensens managed their own farm over the years, as well. They raise crops with conservation in mind, using minimum tillage, grid soil sampling, terraces, buffer strips and grassed waterways. Over the years, they have continuously improved their feedlot operation with environmental quality in mind, as well. Six rows of tress in windbreaks surround the farm, and an Iowa State University manure management research and demonstration project helped maximize the nutrients available from the feedlot.

IBIC is the Beef Checkoff Program in Iowa. Funded by the $1 per head national checkoff and 50 cent per head Iowa state checkoff, the beef checkoff works to increase demand for beef through education, promotion and research. Advertising, public relations efforts, educational programs and new product development are important ways the checkoff works for the Iowa beef industry.

Last year, Iowa cattle producers voted to reinstate the Iowa State Beef Checkoff, adding the 50 cents to the $1 per head national checkoff, which had been in place for 30 years. Terri firmly believes in the importance of the beef checkoff, and says that the additional funds from the state checkoff offers “tremendous opportunities for the checkoff to reach more consumers with the message.”

The checkoff, Terri says, is vital to Iowa’s beef producers like her and Kevin. “It’s another level of our business. We can’t do everything – and I know that people have heard that many, many times – but it’s true. We can’t be doing all of the promoting and all of the education and all of the research ourselves, so this is another arm of our business. And when you look at the value we receive for our $1.50, it’s phenomenal.”

From advertising campaigns, like the re-launch of the iconic “Beef, It’s What’s for Dinner” campaign to work with retailers and dieticians to feature the health benefits of beef, the checkoff is reaching consumers in new and innovative ways. While advertising of the past primarily took place on television, more recent beef ads are appearing online, as part of smartphone apps, or on social media. “We need to tell the millennials our story and help them realize the benefits of beef in the diet,” Terri says.

Terri served 14 years on the board of directors for the Iowa Beef Industry Council, fulfilling the roles of treasurer, vice chair and chair during her tenure. She has also been active with the Iowa Cattlemen’s Foundation’s Youth Beef Team.

Nationally, Terri is also a recognized leader. She was NCBA Federation Director for the state of Iowa and was elected Region III Federation Director, representing Illinois, Iowa, Minnesota, Missouri and Wisconsin. She was a federation committee member of the NCBA Joint Budget Committee, and served as vice chair and chair of the “Beef, It’s What’s for Dinner” national advertising campaign. She has also served on the NCBA Nominating Committee, which selects national leadership; two years on the operating committee, which determines how national checkoff dollars are allocated; and was chair of the Consumer Information Committee, which oversees 5 subcommittees. She also took part in the 3 member committee that selected sites for NCBA annual conventions.

Much of Terri’s work at the local, state and national level has focused on increasing the demand for beef in the US and abroad. Terri represented Iowa in trade missions with the Iowa Department of Economic Development (IDED) and United States Meat Export Federation (USMEF) to Japan, South Korea, China, Hong Kong, Mexico and Costa Rica. Kevin also participated in trade missions to Japan and South Korea.

Trade missions like the ones the Carstensens took part in help build relationships, understanding and trust with foreign customers of US beef, and expand beef’s position in the global marketplace. International markets added $277.31 to the value of a fed steer in 2017, significantly helping Iowa cattle producers’ bottoms lines. “If we didn’t have our global markets,” Terri says, “we’d be back to the BSE years and that was devastating to cattle producers.”

Closer to home, the Carstensens have raised three children on the farm. Distie and her husband live in London with their two sons. Daughter Charise and her husband live in Des Moines with their 17 month old daughter. They are expecting a son in the spring. Carstensens’ son, Durel, and his wife have three young sons, and live in Minnesota.
Although Kevin and Terri’s children did not return to the farm, they are very passionate about agriculture and their roots in rural Iowa. Their career paths have led to opportunities for other young Iowans to partner with the Carstensens in their farming operation. Kevin and Terri have worked with three nearby young farmers as partners to help them gain a foothold in the farming business.

More than 40 years of life on the farm combined with leadership positions in our country’s most influential beef organizations has taught the Carstensens many lessons over the years – lessons they’re eager to share with younger producers. Kevin summed up that advice in an article he wrote for the Iowa Cattleman magazine in 2006, and says the advice is still applicable today:

He adds one more piece of advice for today, though: Be careful how you manage risk.
And when you make money, put a little away for a rainy day.

Kevin and Terri weathered the storm of the 1980s, and recognize that many of today’s younger producers haven’t experienced that type of economic climate before. So, they caution farmers to be careful with their finances, and involve both spouses in the financial decisions on the farm. Terri has always managed the book work for the farm, but recognizes that many farm wives work off the farm, and it may be harder to stay involved.

The Carstensens’ partnership at home and on the farm is symbolic of the partnership between the Iowa Beef Industry Council and Iowa Cattlemen’s Association today. Just as Kevin and Terri have worked together to maintain their farm over the years, Iowa beef industry organizations work together to protect and grow Iowa’s beef business.

Both Kevin and Terri are still active in the state, local, and national cattle industry organizations. Although they have given a lifetime of service to the beef industry, they show few signs of slowing down now. As Kevin says, “We need to spread our passion for the cattle industry.  We need to involve the young people in our communities.  We need to stand up for what‘s right and we need to love our families, friends, God and this country to ensure this livelihood for years to come.” 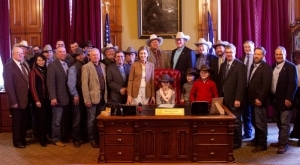 AMES, Iowa — The Iowa Cattlemen’s Association (ICA) creates influence by placing the right leaders, in the right place, at the right time. On Feb. 23, ICA saw great participation from its grassroots membership, as board members, county leaders, cattle producers from all sectors and students showed their loyalty and commitment to Iowa’s cattle industry […] 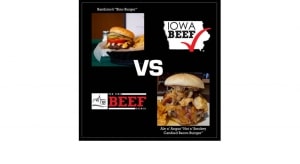 ROME, N.Y. — And you thought this year’s Best Burger Contest was over! The New York Beef Council (NYBC) and Iowa Beef Industry Council (IBIC) are putting their state’s best burgers to the test in a battle for bragging rights of the ultimate best burger. Starting on May 24, consumers have a chance to cast […] 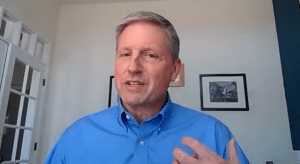 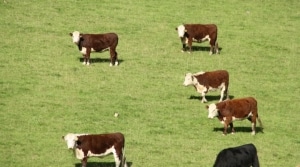