Home / DelMarVa / Virginia / Cantaloupe season off to a sweet start for Va. farmers 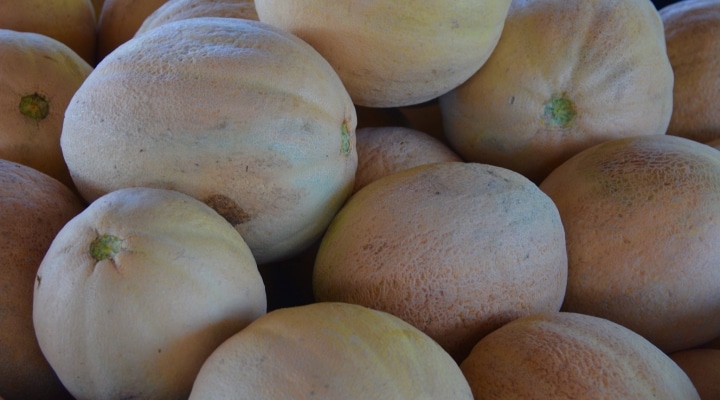 Cantaloupe season is off to a sweet start in Virginia thanks to a streak of warm, dry weather at the beginning of summer. (photo by Michele Dorsey Walfred, creative commons/flickr.com)

SCOTTSBURG, Va. — Cantaloupe season is off to a sweet start in Virginia thanks to a streak of warm, dry weather at the beginning of summer.

“People want sweet cantaloupes that have high sugar content,” said Halifax County produce farmer Don Reese. “That’s one thing this hot weather we’ve had does—it increases the sugar content in the melons and makes them sweeter. It’s been prime weather this summer for that.”

Reese started selling cantaloupes at Reese Farm Inc.’s farm stand in Scottsburg on July 10, about 10 days later than usual. He also noted the first melons he harvested were relatively small due to unseasonably cold weather in April.

“We have a really good crop overall,” he said. “They’re good quality and have the sweet flavor customers are looking for.”

Accomack County grower Susan Dattner said the first of her cantaloupes were harvested July 19, and she noted the melons’ quality and taste were “great.”

Dattner reported growing conditions on Virginia’s Eastern Shore have been favorable this summer, but with temperatures intermittently reaching the mid-90s, her crop may require some respite from the heat.

“The melons do good in heat, but they don’t like excessive heat,” she said. “Too much will slow their growth.”

Rob French, who grows cantaloupes at Sunnyside Farms in Cumberland County, also noted some of his initial crop was stunted by the cool spring.

“The first set came off really small because of those up-and-down temperatures in spring,” said French, who also serves on the Virginia Farm Bureau Federation Specialty Crops Advisory Committee. “We’re into our second and third set now, and they’re a really good size and have good flavor—sweet as they should be.”

French began selling cantaloupes at the beginning of July, and he anticipates sales continuing through mid-September at his farm and at farm stands in Buckingham and Powhatan counties and in Farmville.

He said as long as his cantaloupes can avoid soaking rain, they’ll continue to thrive in the summer heat.

“Warmer weather and minimal rain is what we need for the rest in the field to come through,” French said. “I know most farmers don’t want to hear that, but cantaloupes just can’t handle a lot of rain.”

Maximize your fun at the State Fair by planning ahead
September 13, 2021