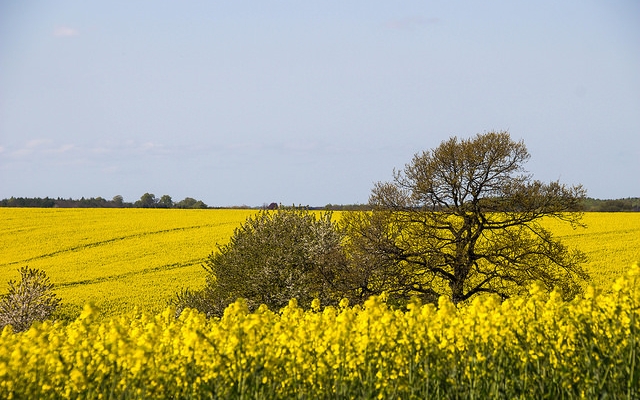 Traditionally, soybean meal has been the gold standard when it comes to protein sources, but for dairy producers, canola meal can be an effective protein that cuts costs and actually increases production. (Susanne Nilsson via Flickr)

ST. CLOUD, Minn. — In any livestock operation, managing costs is a critical factor in staying profitable. Feed costs are one of the largest costs associated with raising an animal, often accounting for 60-70% of costs. Supplemental protein is a necessary, but expensive component of the diet. Traditionally, soybean meal has been the gold standard when it comes to protein sources, but for dairy producers, canola meal can be an effective protein that cuts costs and actually increases production.

Canola meal is a byproduct of canola oil processing. As demand for canola oil has increased, acreage grown to canola in Canada and parts of the Northern Plains has increased as well. Because of this, there are ample quantities of canola meal that can be shipped down from our northern neighbors. Canola meal has a lower percentage of crude protein than soybean meal. Canola meal features about 38-40% crude protein, compared to 46-48%, which is common with soybean meal. Additionally, canola meal has less metabolizable energy and higher fat contents than soybean meal.

In feeding trials, canola meal has been shown to increase milk production in middle lactation dairy cows. Research performed at the U.S. Dairy Forage Research Center in Madison, Wisconsin tested the differences in milk yield, protein content, and fat levels in the milk. Their findings were a bit surprising, as middle lactation cows increased production by 2.2 pounds per day when fed canola meal instead of soybean meal. Not only was there an increase in milk production, as fat was increased by 0.11 pounds and protein saw an increase of 0.07 pounds per pound of milk. Additionally, dry matter intake was increased by 0.9 pounds per day. Canola meal also has a more complete amino acid profile than soybean meal, with research showing little difference in diets adding methionine as compared to canola meal with no supplementation.

Canola meal can be a way to maintain or increase production while cutting feed costs. However, higher inclusion rates and decreased energy values can be potential drawbacks of making this substitution in your herd.

Dual-Purpose Canola: An opportunity for extending forage in a dry year
April 28, 2021