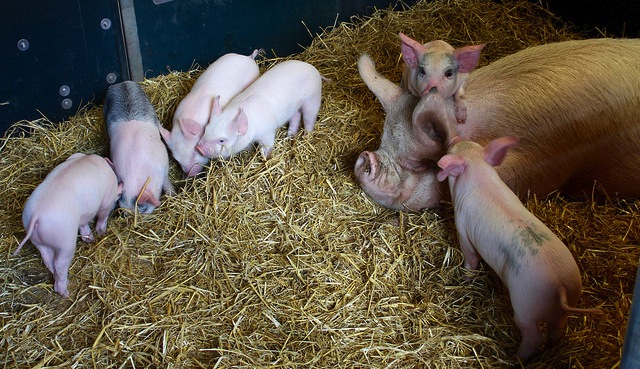 Although it doesn't pose a threat to human health or food, porcine epidemic diarrhea is almost always fatal for pigs under three weeks of age due to dehydration. (Neil Turner, Flickr/Creative Commons)

WINNIPEG, Canada — Farmers in Manitoba, Canada’s third-largest pork producing province, are scrambling to contain a mysterious outbreak of a rapidly spreading virus that’s deadly to piglets and threatens to harm their industry.

Since May 2, porcine epidemic diarrhea has hit 51 pork operations in the province, housing about 20 per cent of the province’s sows as well as hundreds of thousands of young pigs.

“We had a total of 10 cases in three years, so that’s what’s throwing us off for a loop … What happened this year that we’ve suddenly got 50?”

He said the virus has so far been contained to about a half-hour’s drive radius surrounding Steinbach, southeast of Winnipeg, and farmers are doing what they can — including reviewing biosecurity measures, equipment and clothing — to stop it from spreading.

Although it doesn’t pose a threat to human health or food, porcine epidemic diarrhea is almost always fatal for pigs under three weeks of age due to dehydration.

Dickson said trucks that ship swine to the U.S. used to have to be cleaned in Manitoba, where he says the process is more thorough than it is south of the border. But that requirement has been lifted, and he believes that may be a possible cause behind the outbreak.

“I’m not going to say it’s caused all of them, but it doesn’t help knowing that some of these trailers may be coming back not clean, or been infected,” he said.

Dickson said he has called on the federal government to put the requirement back in place and is hopeful it’s listening.

Maria Kubacki, a spokeswoman for the Canadian Food Inspection Agency, said late Monday that the requirement to clean trucks in the U.S. is meant to prevent the entry of diseases that are in the U.S. but not Canada, and that on-farm biosecurity measures are the best line of defence to prevent the spread of the virus.

Kubacki said there are discussions between the federal and Manitoba governments to examine all possible options when it comes to regulations.

Megan Bergman, Manitoba’s chief veterinary officer, said that while there haven’t been cases of the virus directly tied to trailers, the province still encourages operators to wash trailers again in Canada because they can’t be sure how well they’ve been cleaned in the U.S.

She said it would make sense to require trailers coming back to Canada be washed with the high-temperature water and heat drying used here that helps sanitize them.

“It allows us to have that extra layer of security to be able to use these facilities in Canada. So certainly we believe that would be a tool in our toolbox, if we can limit the amount of washing that occurs in the U.S.”

Bergman said the province and industry have also set up buffer zones around the affected farms and created a disease management group to share information and co-ordinate efforts.

She said the province has also been helping with the mental health issues that come with widespread diseases.

“The impact on individual producers and their farms can be very devastating.”

According to the CFIA, the first confirmed case of the virus in Canada was in January 2014, in Ontario, just as an outbreak swept through the U.S., killing more than eight million piglets.

Since then, the virus has also been reported in Quebec and Prince Edward Island.