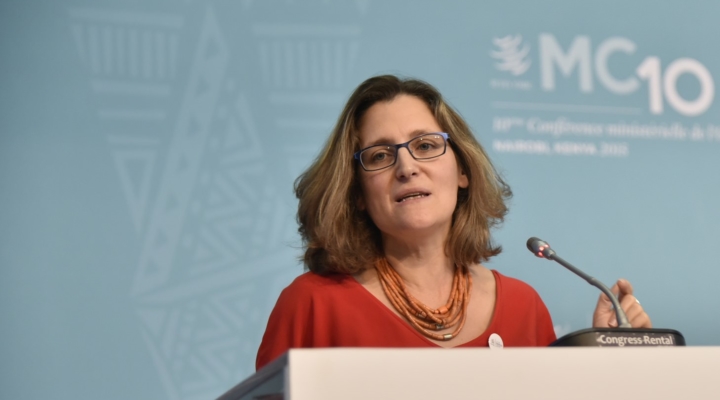 OTTAWA — High-level meetings are set to resume this week in Washington in an effort to bring Canada into a revised North American Free Trade Agreement.

The renewed effort comes as the Opposition Conservatives criticize Prime Minister Justin Trudeau for the tactics his government has been using to get a NAFTA deal done.

Foreign Affairs Minister Chrystia Freeland said Monday that she and U.S. Trade Representative Robert Lighthizer have agreed to meet again face-to-face to try to reach an understanding about each other’s positions on NAFTA, although an exact meeting schedule hadn’t been set.

Freeland told reporters in Ottawa that trade officials from Canada and the U.S. have been meeting in the American capital since last Thursday, continuing what the minister described as “intensive” talks aimed at reaching a deal.

The discussions are being held under a Sept. 30 deadline for getting the text of an agreement to the U.S. Congress.

President Donald Trump started the clock ticking last month when his administration informed Congress of a U.S.-Mexico trade pact, which he invited Canada to join.

Freeland told reporters in Ottawa, where MPs were returning to Parliament after their summer break, that she and Lighthizer would meet later this week.

“The specifics of our calendar we haven’t quite yet worked out.”

The Conservatives have for the most part, until now, made efforts to project a team Canada spirit with the Liberals as the talks have progressed.

But Opposition House Leader Candice Bergen criticized the prime minister Monday for his approach to the talks, saying the Conservatives would have done things differently.

“We certainly wouldn’t have gone in and lectured on things like gender rights and the environment,” Bergen said when asked how the Conservatives would have handled the negotiations.

“What the prime minister had done in these trade negotiations is tick people off,” she said.

While Canada has been pushing for chapters in NAFTA aimed at strengthening labour protections and gender equality, the overall negotiations are said to have stalled over Canada’s insistence that an agreement contain an independent dispute-settlement mechanism.

The prime minister has also vowed to protect Canada’s supply management for dairy and poultry products against U.S. demands for greater access by its farmers to Canada’s dairy market.

Supply management has been a big issue in the provincial election campaign in Quebec, home to about half of Canada’s dairy farms.

Quebec Liberal Leader Philippe Couillard has warned there will be “serious political consequences” if there is any further dismantling of the protections for dairy farmers through NAFTA negotiations.

The issue was expected to play prominently Monday evening in the provincial party leaders’ second election debate — this one in English.

Ontario Premier Doug Ford and his economic development minister, Jim Wilson, were scheduled to travel to Washington on Wednesday for an update on the NAFTA talks, which the premier characterized as critical to his province’s agriculture, automotive and steel industries.

Ford’s team is expected to meet with Canada’s trade officials, as well as the Canadian ambassador to the United States, and the premier said in a statement that he planned to stress the need to protect Ontario workers.

Freeland said she would welcome any efforts by the provinces to bolster Canada’s position at the bargaining table. “I think that the involvement of premiers from provinces and territories across the country has been very positive.”

US-China tariffs: Who stands to be hurt?

Tariffs imposed on $200B more of Chinese goods

Save the date for 2020 Dairy Financial and Risk Management conference
May 27, 2020