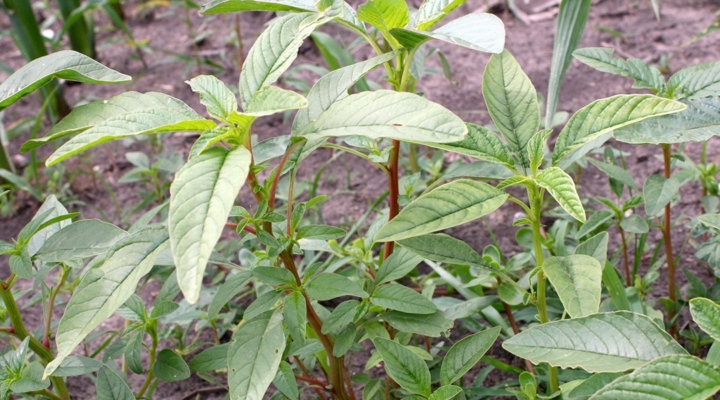 A team including scientists from the University of Illinois has identified the ways in which glyphosate-resistant waterhemp has emerged in corn and soybean fields in southwestern Ontario. (Courtesy Photo)

URBANA, Ill. — A team including scientists from the University of Illinois has identified the ways in which glyphosate-resistant waterhemp has emerged in corn and soybean fields in southwestern Ontario.

In a study published Oct. 1 in Proceedings of the National Academy of Sciences, the team reveals glyphosate resistance, first detected in Ontario in 2010, has spread thanks to two mechanisms: first, pollen and seeds of resistant plants are physically dispersed by wind, water, and other means; second, resistance has appeared through the spontaneous emergence of resistance mutations that then spread.

Patrick Tranel, professor in the Department of Crop Sciences at the University of Illinois and study co-author says, “Creating an assembled genome for waterhemp was a critical step of this study, because it enabled us to reconstruct evolutionary histories of the resistant populations. Moving forward, the reference genome that was obtained for waterhemp will open new opportunities to investigate why it is such a successful weed.”

In reconstructing the evolutionary histories, the study’s lead author, Julia Kreiner, a Ph.D. candidate from the University of Toronto (U of T), notes, “To our surprise, we found that the genomes of some resistant plants in Ontario were nearly identical to those in very distant U.S. plants. This was evidence that the Ontario plants were very closely related to the U.S. plants and suggests that the former came from seeds that were just picked up from one field and dropped in another.”

While the team did not determine exactly how the seeds were physically transported, typical means include movement in water, in the digestive tracts of animals, or from field to field by way of farm equipment. And especially with a wind-pollinated plant like common waterhemp, genes can also be spread via wind-borne pollen.

The same DNA analysis identified some resistant plants that did not genetically match any other plants, suggesting they appeared through the independent emergence of a genetic mutation that conveyed resistance.

The researchers were surprised to discover both mechanisms at play.

“We have two regions, Walpole Island and Essex County in southwestern Ontario, where waterhemp populations evolved resistance,” says Stephen Wright, a professor in ecology and evolutionary biology at U of T and a co-author of the study. “Because of their proximity, our expectation was that they would have shared the same origin of resistance. But our results suggest different origins — from the movement of seed from a source population in the U.S. as well as independent evolution of resistance in a local population.”

According to John Stinchcombe, also a professor in ecology and evolutionary biology at U of T and a co-author, “One of the most striking findings is that we see both ways that weeds could become resistant happening on really short time scales. Evolution is happening very quickly, and using multiple mechanisms.”

Detlef Weigel, a co-author from the Max Planck Institute in Germany adds, “Because herbicide-resistant waterhemp had appeared in the U.S. long before such plants were found in Canada, we were convinced that evolution of herbicide resistance is very rare and had occurred only once. Now that we know that it can occur repeatedly, the next question is whether one can slow down the evolution of new genetic variants that make waterhemp herbicide resistance.”

From a practical standpoint, the study adds insights into what farmers need to do to reduce the occurrence of herbicide-resistant weeds in their own fields.

Tranel notes, “Not only should farmers be using crop rotations and multiple effective herbicides with different modes of action to delay resistance, but also, they must be vigilant so that new resistant biotypes, and even new weed species, don’t move into their fields.”

The article, “Multiple modes of convergent adaptation in the spread of glyphosate-resistant Amaranthus tuberculatus,” is published in Proceedings of the National Academy of Sciences [DOI: 10.1073/pnas.1900870116]. The research was supported by Natural Sciences and Engineering Research Council of Canada Discovery Grants.